The 2017 Rugby League World Cup in Australia and New Zealand gets underway on Friday. The showpiece event looking to showcase the sport around the world and get the juices flowing like the event in England four years ago did will see 14 nations battling it out over five weeks of potentially intense action.

A quirky format designed to get as many level looking match ups as possible has been devised which should make for a competitive competition as the international game looks to continue its growth.

The 14 teams have been split into four groups. Groups A and B have four teams in it with each side playing the other three in the group stage. Groups C and D have three teams and those sides play the other two in their group plus one of the other group to make up their three games. The top three sides in Groups A and B qualify for the quarter finals as do the winners of Groups C and D. The tournament turns into a knockout event from the quarter final onwards.

The defending champions go into the tournament as the expected winners of this year’s event. Home advantage and a perceived weakness in many of their opponents look to make them a shoe in but we saw in 2008, when they were being handed the trophy before a ball was kicked, that sport does not always work out as planned.

England head into the tournament with their fans very optimistic of putting up a big showing. A combination of powerful NRL forwards and an exciting Super League back line gives them every chance of going well. Historically England have frozen in the big matches but if they can stay mentally strong when the going gets tough they could be the ones to surprise the hosts.

Four years ago France would have been among the favourites to make the semi-finals of the tournament but they have faded fast in the international game as other nations have recruited from elsewhere. The Catalans Dragons have been ploughed with overseas imports which has impacted on the national side. They will be aiming to beat Lebanon and make the QF which would represent an acceptable return for their efforts.

Lebanon have the high profile Robbie Farah leading them into battle in this tournament. A number of NRL players are included in their squad but despite that beating France and making the QF looks to be the limit for this group of players.

New Zealand will be hoping to regain their crown but they have not been helped with a bunch of players defecting to represent Tonga in the competition. In Shaun Johnson, Roger Tuivasa-Sheck, Kodi Nikorima and Jared Waerea-Hargreaves they have match winners but whether they have enough of them to challenge the Aussies remains to be seen.

The Samoans stole the show four years ago when the human wrecking machine Mose Masoe bashed up opposition like a bowling ball going through skittles. They have been competitive since then and will be favourites to make the quarter final. They should be looking to go further but may fall a touch short.

Scotland made a name for themselves in the Four Nations last year when they held New Zealand to a draw but they look to be overrated off the back of that. They were able to slug it out in heavy conditions last year but they will have to run the ball on good surfaces here and that could be beyond them. Quarter finals would be a great result. 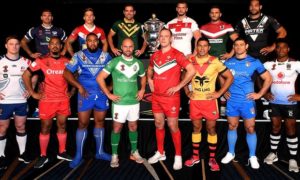 Tonga are the team who have plummeted in the market since the likes of Andrew Fifita, Michael Jennings, Jason Taumalolo and Manu Vatuvei chose to play for them. Daniel Tupou is another who can make a big impact and if they can find someone to do the necessary business out of dummy half and stumble on a half-back combination their forwards can do some serious damage to sides. If there is a surprise finalist it could be them.

Ireland are the outsiders of the 14 which is no real surprise. They face it really tough with Papua New Guinea in their group and if that wasn’t hard enough they landed Italy in the cross-group match which won’t be a whole lot easier. They have some decent forwards in their ranks but the fact the majority of their squad ply their trade below Super League level means the Irish won’t be gracing the tournament beyond the group stage.

Papua New Guinea could be the surprise package in the tournament. They will enjoy home advantage in the early rounds and should come through their group. If they catch England on an off day in the quarter final and strike gold they could ride the wave of adrenaline and make the latter stages. Anything that involves a knockout match would be a successful tournament.

All things being equal the Welsh are another side who are making up the numbers in this tournament but you should never write off a team coached by John Kear. They could have been helped by avoiding Fiji in the cross group match but that draw will only ensure their tournament life will be short lived despite whatever Kear can conjure up.

Fiji have been semi-finalists at the last two tournaments and they’ve landed a plum draw to push for another semi-final spot. Assuming they win their group, which is likely given that they face Wales in the cross-group match, they will take on second in Group B in the quarter final which would be the most even of the four in that round. With class acts like Jarryd Hayne and Apisai Koroisau in key positions don’t write off the islanders.

Italy have picked up some useful players to go to war with in this tournament. James Tedesco could not have been far away from the Australia side while the likes of Josh Mantellato, Mark Minichello and Paul Vaughan have plenty of experience. Italy might surprise the Irish along the way but they will be hard pushed to see off Fiji which they’ll need to do if they are to escape the group.

The Tomahawks’ run to the quarter final of the last World Cup was probably the biggest story of the competition and as a result everyone got behind them. That isn’t going to be repeated here though. Brian McDermott is the man given the task of emulating the success that Terry Matterson had with the USA but the majority of their squad is from the local leagues back home and the fear is that they could be the whipping boys of the event.

This is not an easy tournament to bet on for a couple of reasons. The main one being that Australia should canter to the title. We all know what happened in 2008 and anyone can beat anyone in sport blah blah blah but logic suggests Australia will win this tournament and they’ll do so without losing a game if they are not caught cold by England in the opener. The other reason why betting is not easy is no bookmakers are offering each way terms on the outright market.

Patriotic punters may want to back England at 8/1. They probably wouldn’t be that price to beat Australia in the final but their chances wouldn’t be too much better than those odds suggest. 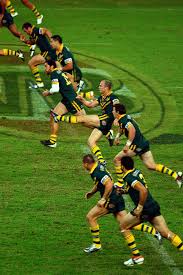 The only bet that I can recommend from the tournament side of things is a little dabble on Tonga to make the final. They are the sort of side who should improve the longer they are in the tournament and with their pack they will be dangerous. They might lack creativity which is a concern but I’ll pay to see if they can make the last game.

The best market to have a go at from a tournament point of view is for the leading try scorer in the event. I’ll go with two men to hopefully fill their boots.

Ryan Hall is a relentless try scorer at this level and with England favoured to make the final he should be backed as he’ll get maximum game time in the competition. England will hope to put France and Lebanon to the cleaners in the group stage while PNG should give opportunities for him to add to his tally in the quarter final. Any he scores in the big matches are a bonus but he can do enough against the minnows to be competitive.

The same thinking applies to Akuila Uate of Fiji too. I expect them to go to town on the likes of Wales and USA while Italy might not be able to contain the power out wide of this side either. There is a chance that Fiji could bite the dust in the quarter final but if they can eek out one more win Uate could be right in the leading try scorer mix.