The Premier League weekend ends with another Monday Night Football this week and this time the offering is an intriguing one between a Sheffield United side who are looking to establish themselves in the division and an Arsenal team looking to kick on.

The Blades have been competitive in the majority of their matches this season and have the chance to showcase their credentials under the lights here while Arsenal could move up to third with a win which would be a decent achievement given the critics they have.

Chris Wilder has seen his men pick up two wins from their opening eight matches but I daresay if you offered him three clean sheets in that time and draws at Chelsea and Bournemouth as well as an unfortunate loss to Liverpool, he would have been quite encouraged for the future. Being competitive and positives like playing well are all well and good but ultimately he will know Sheffield United need results.

Their season is not going to be dictated by what they do against teams like Arsenal so in a way they have a free shot at this one, and with just two goals conceded in their last four matches, if they can keep things tight again they would hope to have a real shot at getting something from it. Injuries up top have hampered the Yorkshire outfit a little this term but with the ability to play with an ounce of freedom here I wouldn’t be surprised to see a decent performance from them.

All you seem to hear these days are negatives when it comes to Arsenal but the fact is if they win this match they will be third in the Premier League, and as a neutral looking on I would suggest that is the most they can expect because the top two look a mile clear of anyone else. The disappointment for Arsenal fans will be how poor they’ve looked in the big matches but ultimately it is still only Liverpool who have beaten them this season.

This isn’t perhaps the free flowing Arsenal sides of old although they are still capable of putting the poorer teams to the sword, although that generally happens at home rather than on their travels. Away from home they have a reputation of being a poor side but to their credit they have won at Newcastle and drawn at Manchester United although neither outing looked convincing. This is a chance to show they can dominate away from home. 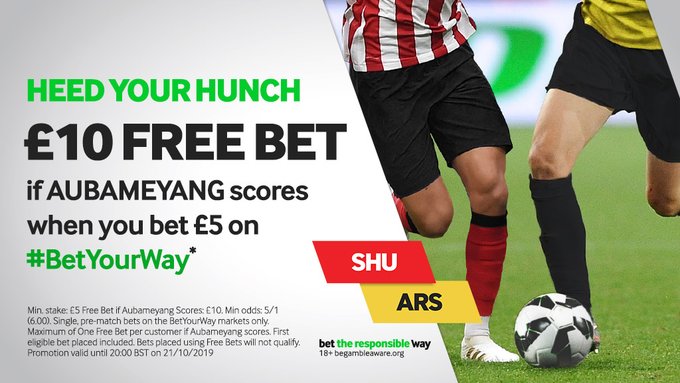 Bet £5 on a #BetYourWay market on the match at Betway and get a £10 free bet if Aubameyang scores! All customers! Click the image above to place your bet! 18+ T&Cs apply. Gamble Aware.

Sheffield United boss Chris Wilder is hoping that Oli McBurnie, David McGoldrick and John Fleck will all recover from injuries in time for the match. The extra 48hrs might well have helped them in that quest.

Arsenal boss Unai Emery has revealed that Alexandre Lacazette and Kieran Tierney will both travel with the squad but he didn’t confirm if either would play here or be saved for the Europa League match on Thursday. Reiss Nelson is out.

I’ll be interested to see what we get from Arsenal in this match. In years past whenever they have come up against a physical side on the road they haven’t always wanted to know and if that is the same here then they are going to come up short once again. I don’t think we need to think too long and hard about what we are going to get from Sheffield United. They will be tough and physical but they’ll play when given the chance too.

I’m not convinced Arsenal are good things in this match. Had it not been for a horrendous error from the Blades keeper, they would have shut Liverpool out here a few weeks ago and as good as Arsenal’s front three are they don’t match up to Liverpool’s. Sheffield United created chances in that game too against a much better defence than this Arsenal one so I can’t be having Arsenal at odds on. The hosts on the Asian lines will do me nicely.