The second set of matches in the return of the Premier League continues on Wednesday when five more fixtures take place as the competition looks to catch up and conclude as quickly as possible after the Covid-19 stoppage.

We saw Tottenham pick up a win on Tuesday evening and on Wednesday we will see the likes of Manchester United and Liverpool in action on what should be a good night of action, all of which can be seen across the various TV channels.

DO YOU THINK LIVERPOOL WILL BEAT CRYSTAL PALACE? SIGN UP FOR A BETVICTOR ACCOUNT BEFORE KICK OFF TO GET 4/1 ON THE REDS COMING OUT ON TOP! CLICK THE IMAGE BELOW FOR THE ENHANCED PRICE. NEW ACCOUNTS ONLY. 18+ T&Cs APPLY. 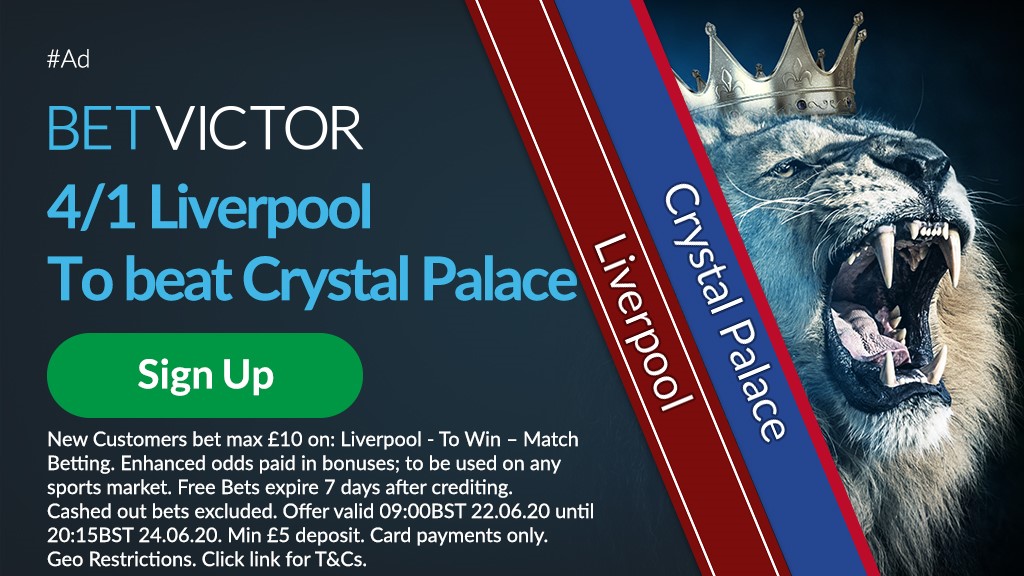 It was a night where Liverpool were hoping to finally end their drought for a Premier League title but by not coming out on top in the Merseyside Derby on Sunday evening they are not able to secure the trophy when they host Crystal Palace in the late kick off. In the early kick offs the most important one would seem to be the one from Old Trafford where Manchester United host Sheffield United, two sides who are heavily involved in the race for Europe, and potentially even the Champions League.

It could be a big night at the foot of the table as well as the three teams who are currently in the drop zone are all in action. Norwich City are bottom of the table and they surely have to find a win when they host Everton in front of the BBC cameras. Bournemouth looked a mess in front of those very cameras on Saturday night and they face a tough trip to Wolverhampton Wanderers on Wednesday evening. The other match sees Steve Bruce hosting one of his many former clubs when Newcastle United take on Aston Villa with the latter really needing some points.

I’ll go with a couple of home teams on Wednesday evening with the first of them coming at Old Trafford where I think Manchester United can feast on a Sheffield United side who are missing some key players and who haven’t really come out of lockdown yet. The Blades will be without the suspended John Egan and goalkeeper Dean Henderson who is not allowed to play against his parent club. Jack O’Connell is also a doubt for the visitors which is not good. I thought Man Utd looked alright against Tottenham on Friday night and they should come on for the run here. They’ve also had 40 hours or so more recovery time for this match too which shouldn’t be underplayed. Sheffield United have had a fine season but it is just teetering on the edge of coming apart at the seams. I expect a comfortable home win here.

Bournemouth looked very poor against Crystal Palace on Saturday evening and I’m not holding out much hope of them getting out of trouble. I’m certainly not confident they are going to get anything for their trip to Wolverhampton Wanderers on Wednesday evening. Wolves looked to have picked up where they left off and while they only beat West Ham on Saturday, Bournemouth are no better than West Ham. I think Bournemouth might have to take the game to their opposition between now and the end of the season and that could play into the hands of Wolves here. You would think changes would be made for this fixture but Wolves look to have the better squad and should run out winners here.

WON – Back Manchester United (-1AH) to beat Sheffield United for a 3/10 stake at 1.73 with BetVictor