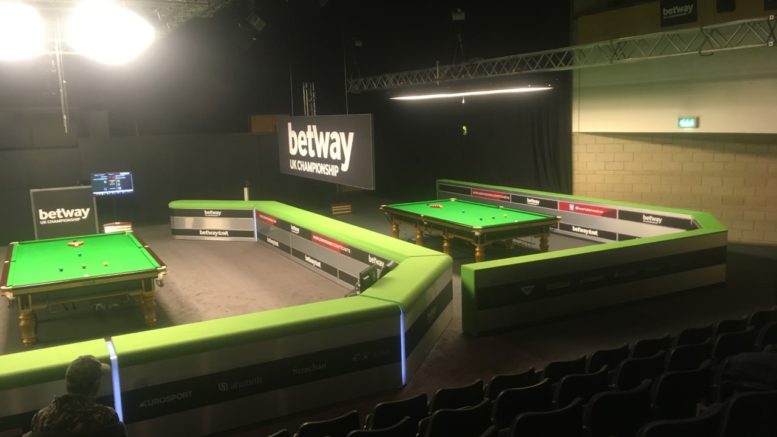 We are down to the quarter finals in the UK Championship, with all four matches taking place across a couple of sessions of play inside the Barbican Centre in York on Friday. This is the last day of two table action so the event is set to go up a notch from here on in.

We lost two big names in Ronnie O’Sullivan and Mark Selby on Thursday, one which we saw coming and the other we intimated could happen, so all the big names are certainly going to be on edge in their quarter final.

The quarter final on the main table on Friday afternoon sees the former winner John Higgins looking to book his place in another semi-final when he goes up against the Chinese youngster Yan Bingtao, the Riga Masters champion who is appearing at this stage of the UK Championship for the first time.

Bingtao does have a win over Higgins in the past but it is the Scot who has won their last three meetings, the last two without dropping a frame so the Chinese ace could be up against it here. Bingtao had a great win over Neil Robertson in the previous round but it is flattered slightly because the Australian was terrible by his standards.

Speaking of poor performances, Higgins was borderline useless against Stuart Bingham in his last 16 clash but I noticed in his interview he claimed he knew what he was doing wrong and will work on the practice table to put it right. I’ve seen this happen with Higgins before and usually someone tells him he is further from the cue ball than usual, as Hendry spoke about in commentary of his last match, and things pick up. I expect that to happen here but it is one of those you need to see before you can put faith in it. I’m happy to let this one go as I’m on Higgins outright so the natural improvement I speak about should get him over the line.

On the other table in the afternoon we have the two most successful Chinese players of all time going at it when Ding Junhui looks to build on his fine win over Ronnie O’Sullivan on Thursday, when he faces Liang Wenbo, who is having another decent run in this tournament.

It is good to see Ding coming back to his best and although it is broken English in his interviews, it is good to hear the hunger is back and that he is practicing again. He still isn’t convincing me in getting over the line though. He could easily have gone 5-4 down to O’Sullivan and I’m not sure he would have won from there, and he was looking like going the distance from 4-0 up against Ali Carter had the Captain not had misfortune when crazily potting the black while potting a red.

Wenbo seems to be growing in strength here which is pretty incredible when you factor in the tragic news of his mother dying last week. I took him on against Li Hang and I’ve got to be honest at 2-2 I thought I backed the right horse but credit to Wenbo, he put in four excellent breaks to win 6-4 and I fancy having less pressure on him here might just let him come through. He has made the final and the semi-final in this tournament so there is something about York that brings the best out of him. Ding is getting back to his best but he’s not there yet. If Liang gets him under pressure he might just get his reward.

The main table in the evening session will see the new tournament favourite Mark Allen going up against the surprise package that nobody could have seen happening when the competition began in the shape of Nigel Bond.

The Bond journey is a pretty incredible one. He has twice come through deciding frames this week including on Thursday afternoon when he came from 5-2 down to beat Gary Wilson. Allen also had to go the distance in the last round, recovering from 5-4 behind to see off Kurt Maflin so these are two battle hardened competitors on show. I’ve got to think Bond’s run ends here. He has been fortunate with opponents not turning up or wilting against him but I don’t see Allen doing that. I’m in no rush to back a 1/10 shot though and even the handicaps offer up little solid appeal.

The other quarter final in the evening session sees two men who got their hands on this title more than a decade ago when Stephen Maguire takes on Matthew Stevens for the right to face the winner on the other table in the semi-final on Saturday.

Stevens did us a turn by seeing off Mark Selby on Thursday but that was a marathon match which will have used up a lot of mental energy and reserves and I wonder how much the Welshman will have left here. Maguire only beat Michael White 6-4 but he was probably good for a slightly easier win than that and he goes into this match with a dominant recent head to head against Stevens.

Maguire has won all five of their meetings this decade and given that he is likely to be the fresher man here, I fancy him to not just come through this match but to do it with a frame to spare. Generally when the Scot gets to this level of the tournament his game is in good shape and so I’m expecting a good performance from him, one which should be too good for the potentially jaded Welshman.