There are three more matches in the Premier League on Saturday, which come either side of the FA Cup final on what is a big day for one of the teams chasing a spot in the top four come the end of the campaign.

Even though fans are back into Premier League stadiums next week, it looks as though the remainder of this term will be played out in front of live TV cameras and that is certainly the case on Saturday where all three matches can be viewed.

Get a £10 RISK FREE no lose bet on the FA Cup final at Boylesports! Click the image below to take advantage of this fantastic offer! New and existing customers. Mobile offer only. 18+ T&Cs apply. Gamble Responsibly. 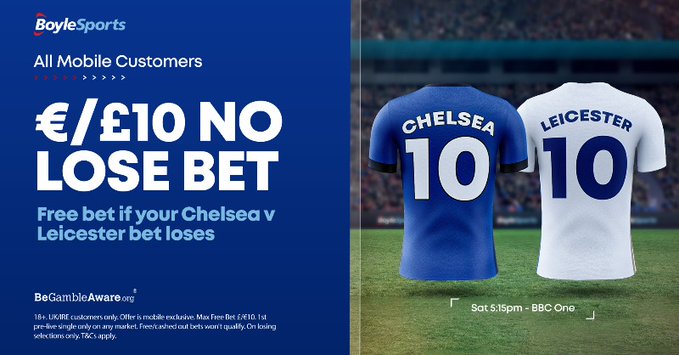 18+. IRE & UK mobile customers only. Customer must place a bet of up to £/€10 to qualify. Max Free Bet £/€10. 1st pre-live single only on any market in the Chelsea v Leicester match, 15/05/2021. One qualifying bet per match (first bet placed). Free/void/cashed out bets won’t qualify. On losing selections only. Free Bet will expire after 7 days. T&Cs apply.

Two of the three matches on Saturday are what you can now call dead rubbers. They begin at Turf Moor where Burnley will be celebrating another season of Premier League football when they play host to Leeds United who have been a breath of fresh air on their return to the top flight. The second match of the day will see Southampton look to continue their bid to finish the season strongly when they host already relegated Fulham.

The one match which has a competitive edge to it comes from the Amex Stadium once the cup final has been played out. It is huge for the visitors West Ham United who know that anything but a win will see their hopes of a top four finish evaporate. They head to a Brighton side who are safe for another season of Premier League football but who might feel they are underachieving sitting one place above the relegation zone, given the good football they play.

I’ll go with just the one bet on Saturday which comes in the middle of the three matches as Southampton host Fulham in a match where I am expecting both teams to find the back of the net. Let us make no mistake about it, Fulham are going down because they don’t score enough goals but now that they know their fate I hope they’ll open up a little and be a bit more expansive as they bid to find some confidence to take into next season.

The real reason why I think Fulham can score in this match is Southampton have only kept one clean sheet in their last 18 matches which was against Sheffield United, the lowest scorers in the league. The Saints could be without defenders Jan Bednarek and Ryan Bertrand here too but at the other end they do have Danny Ings looking to continue to make an impression ahead of the Euros while Che Adams also looks dangerous. In a match that carries nothing in the way of pressure I think the 4/5 on both teams scoring looks a more than fair bet.

Be the first to comment on "2020-21 Premier League – Saturday 15th May Matches Tips, TV and Betting Preview"