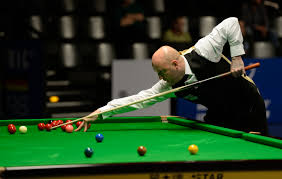 It is quarter final day at the English Open on Friday as the opening Home Nations event of the new season heads towards a conclusion inside the behind closed doors setup at the Marshall Arena in Milton Keynes over the weekend.

We finally saw some big names bite the dust on Thursday but we still have at least one leading player on show in each of the four quarter finals on Friday where two of them come along in the afternoon session and two in the evening.

The defending champion Mark Selby continues his title defence in the first match of the day when he takes on the beaten European Masters finalist from last season in Zhou Yuelong in what might well end up being the pick of the quarter finals.

I say that because these two have met three times in ranking event matches with Selby winning twice to the one of Zhou but all three matches went to a deciding frame. Selby knows all about a deciding frame this week having had to come through one in each of the last three rounds while Zhou also had to play a seventh frame in the second round of the tournament, although in the main the Chinese player has played very well and scored exceptionally strongly in the tournament. That makes me think that Zhou will give Selby as good as he gets in this match and while a decider might not be needed to separate them, although it shouldn’t be ruled out, I do like over 7.5 frames in this one.

The second match on the main table in the afternoon session sees John Higgins looking to keep up his search for a first title this season when he faces off against Jak Jones who will be competing in his first ranking event quarter final here.

Higgins has looked in decent form in this tournament and his 4-1 win over Ding Junhui in the last 16 on Thursday night was a standout victory it has to be said. Jak Jones had a good win over Jack Lisowski earlier in the tournament and another decent one over compatriot Matthew Stevens on Thursday night but I think he’ll need to be at his best to come through this one. I expect Higgins to continue on his merry way here but the odds are fully reflective of that so I’m happy to sit this second quarter final out.

The evening session has a match on each of the two main tables and on the TV table the world number one Judd Trump will continue his rivalry with Kyren Wilson in what looks the pick of the quarter finals on paper at least.

This has been a very up and down tournament for Trump. He has been waiting to be put out of his misery for the first three rounds of it but despite all being 3-1 up against him, none of Louis Heathcote, Yuan Sijun or Michael Holt could finish the job. Ominously for the others Trump looked his best against Gary Wilson in the previous round. Wilson laboured in overcoming Dominic Dale in the first round but he has only dropped two frames in the three matches since then.

This should be a pearler of a contest because we know that Wilson doesn’t fear Trump. Wilson won their last meeting at the World Championship and Trump will surely be out for revenge here. I’m not convinced Trump is firing on all cylinders at the minute though and if he gives Wilson the chance to take him out I don’t think ‘The Warrior’ will disappoint. I think the 7/4 on Wilson to win has plenty of legs as his all-round game looks in good nick right now.

The one quarter final on the second table on Friday is the last of them as Robbie Williams competes at this stage of a tournament for the first time in a while when he goes up against the seasoned campaigner at this level in Neil Robertson.

Williams has done very well to make it this far in the tournament, assisted strongly by his 4-0 win over Mark Allen in the second round, and he has the capacity to be awkward enough to make Robertson work hard for his win. I’m not convinced Robertson is at his best in this event. Mark Joyce had chances to beat him in the second round but since then the Australian has hit his stride. I would be surprised if Robertson doesn’t win this but my gut feeling tells me he isn’t a certainty. I don’t have a strong enough feeling either way to punt on the match though.