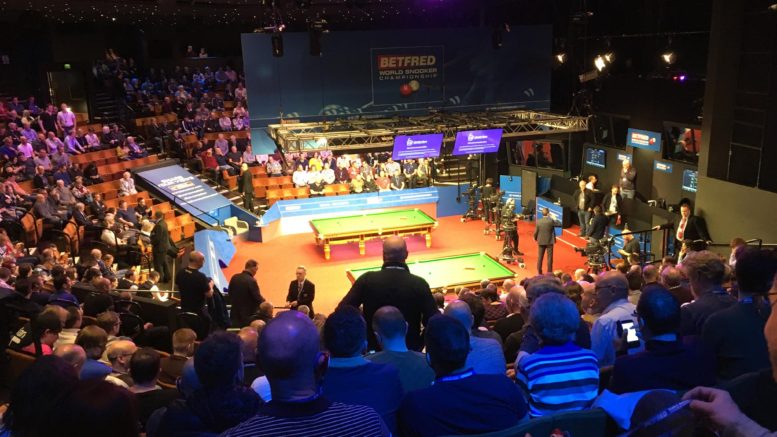 The Betfred World Championship finally gets up and running after a three month delay on Friday and it does so with a four-match card rather than the usual five after the withdrawal of Anthony Hamilton wiped his match with Kyren Wilson off the schedule.

We might have lost a match but with Judd Trump beginning his title defence, two other former world champions and the current UK Championship holder all on the card, we certainly will not lack for quality over the course of the day.

I’m sure everyone knows the format by now but for those who are unsure of it, it is long course snooker all the way over this 17 day marathon. The first round is the best-of-19 frames which goes up to the best-of-25 for the second round and the quarter finals. The semi-finals at the best-of-33 frames and then the four session final will see a champion crowned on the third Saturday and Sunday over the best-of-35 frames. The draw was conducted on Wednesday.

The headline match on the opening day of the competition comes on table one where the defending champion Judd Trump begins his title defence with the potentially tricky test that is Tom Ford. This is the only match to finish on the opening day and could provide the drama deep into the evening.

We all know about the ‘Crucible Curse’ by now and it has claimed champions in the first round in the past, notably Steve Davis when Tony Knowles took care of him in 1982. Trump will know he will need to be at his best to come through here. Ford looked good in qualifying, knocking in three tons in a 6-3 win over Gerard Greene and a barrel load of 50 breaks against Stuart Carrington. All eyes and indeed all the pressure is on Trump here so it will be interesting to see how he copes with that.

Trump might well win this match but he could get into a right ding dong if he brings the form we’ve seen from him in the first two tournaments since lockdown with him. He was rough as anything in the Championship League and scarcely any better in the Tour Championship where he moaned he couldn’t get going because it was too hot – hardly encouraging words ahead of the hottest day of the year in a pressure cooker arena. Ford might fancy his chances here. He’ll go quietly about his business and is a better player than the one that took eight frames off Trump here in 2014. Trump is better too but I’m not sure the gap has widened that much. The 4.5 frames Ford is in receipt of looks huge. I’ll take that and I’m nibble at the 7s he pulls off the ultimate shock too.

Stuart Bingham vs Ashley Carty (Friday 10am & Saturday 10am)

While all eyes will be on the current champion on Friday morning, over on table two the 2015 winner of this title will go about his business when Stuart Bingham faces Ashley Carty in a real battle of experience vs inexperience as Carty makes his debut in this event.

We’ve seen a fair bit of Carty recently as he had a wonderful run in the Championship League and then qualified with a deep run for this tournament. He clearly doesn’t lack confidence or indeed the game but this long format stuff is a different thing entirely. We did see the character of Carty in the final qualifying round. Robert Milkins hit a purple patch of four tons in a row but Carty still came through. Despite that I can’t see beyond Bingham with his experience here but I respect Carty enough to leave handicaps and things alone.

Given that the other match in the afternoon has been cancelled, Ding Junhui and Mark King will have the arena all to themselves for their opening session on Friday before they come back to conclude their encounter on Saturday afternoon.

King did well to come through qualifying because he hadn’t really shown signs of producing anything for a while. He might well fancy his chances of catching Ding cold here because the Chinese superstar has been locked up in quarantine for a couple of weeks and will be playing his first match since lockdown. There are a number of people talking up Ding’s chances in this tournament but I don’t see it. I’m tempted to take him on but I’ll watch the first session and get a gauge of how the Chinese ace is playing before committing.

The 2018 champion Mark Williams starts his quest for a fourth world title over on table two in the evening session on Friday when he faces an Alan McManus who was a semi-finalist on his last appearance at the Crucible and who has to be classed as a danger in this match.

I say that because McManus has been playing at the qualifiers last week and he has bags of experience of this venue. The downside to that though is that in 16 winning frames in qualifying he only managed two breaks over 52. He is going to need to score much better than that if he is going to come through here because as clever as he is around the table he is unlikely to beat Williams in the safety battles too often.

Williams might come out a little rusty given that all he has been doing is practicing since lockdown but the more he gets into the match the better he should become. If he can live with McManus before the first interval and edge him by halfway he should pull clear in the second session and cover a 3.5 frame handicap. Williams needs to win a couple of matches here and I think he has a 10-6 win in him here.