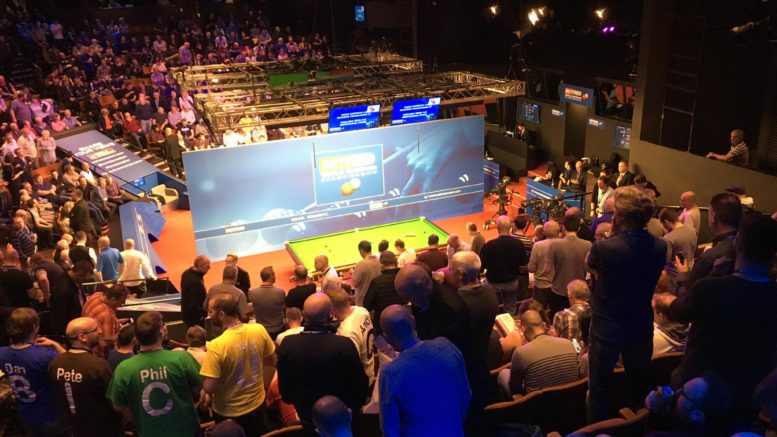 Sunday is the day that the quarter final line up will be determined at the World Championship as the last four second round matches to be completed come to a conclusion inside the Crucible Theatre in Sheffield on what could be a very dramatic day of snooker.

We already know half of the line up for the last eight of the tournament but who will join the four men already through to the next round is the guess of anyone. One thing is for certain we will have four extremely happy men at the end of the day and four not quite so.

We had no matches that finished on Saturday but that didn’t stop us from having some good snooker from the four games in which there was action. The big match between Ronnie O’Sullivan and Ding Junhui certainly didn’t disappoint and they ended where they started which was all-square. They’ll begin on Sunday night locked at 8-8. Anthony McGill and Jamie Clarke are the others who will play to a finish in the evening session on Sunday. After leading 6-2 going into the second session, Clarke saw his lead reduced to 8-7 ahead of a tense Sunday conclusion. Things are a lot more comfortable for Kyren Wilson who started his tournament like he had been playing for weeks. He leads Martin Gould 11-5 and needs two more on Sunday afternoon to set up a quarter final with Judd Trump. The other heavyweight clash is also locked at 8-8 after two sessions with Barry Hawkins and Neil Robertson basically playing a best of nine for the right to face Mark Selby in the quarter final.

There is only in play betting to go at on Sunday and in the afternoon session there is no point betting on the match between Kyren Wilson and Martin Gould as that should be a simple win for Wilson. Gould holds the highest break with a 129 though so hopefully that stands up. It is time to get involved in the other game between Neil Robertson and Barry Hawkins though. That match looks to have a deciding frame written all over it. I mentioned in my pre-match preview for this one that Robertson seems to constantly get embroiled in these tight matches in this stage of the tournament and doesn’t always get over the line. I don’t see Hawkins backing down and I certainly don’t see Robertson going without a fight. We’ve seen four tight matches in this round already and from 8-8 it is hard to believe this one won’t be another that has over 23.5 frames in it. I’ll happily play the over there at 4/5.

Moving into the evening and while I’ve got enough tied down on Anthony McGill in his match against Jamie Clarke, I can’t resist a punt on the other big contest on the other side of the divide between Ding Junhui and Ronnie O’Sullivan where the Chinese player is a little too big to ignore at 7/4. Ding isn’t going away in this contest and has been doing the better scoring. O’Sullivan hasn’t played much snooker in 2020. He missed The Masters and never even qualified for the Tour Championship so lacks competitive reps which could be detrimental to him at the business end of this one. You could argue the same about Ding but we saw at the UK Championship that it isn’t as much of an issue with him. I just think Ding has played the best snooker so far and I think he will go on and get the win like he did when they met here three years ago.