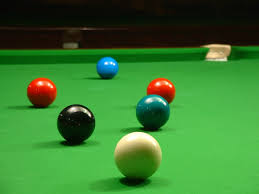 The second round of qualifying for the World Championship gets underway on Thursday at the English Institute of Sport with 16 players back on the baize and 16 more getting going on it for the first time in the tournament.

The winners of these matches will be just two victories away from walking through the magical curtains at the Crucible Theatre later in the month, so a spot in the main draw is getting within touching distance now.

Once again we have the TV table and the streamed table occupied in this afternoon session. Jimmy White is back in front of the TV cameras as he continues his bid for a return to the Crucible when he takes on a Michael Georgiou who tasted that venue for the first time last term and will be itching for another slice of it. The streamed table will see Robbie Williams, another man who has sampled the Crucible before, going up against Wu Yize for a place in the third round.

Elsewhere one of the surprise packages in the Championship League, Ashley Carty, faces Ross Muir while Lee Walker takes on the newest player onto the tour for next season in Allan Taylor. Joe O’Connor comes in to take on Duane Jones with two veterans meeting in what might be a bit of a lengthy battle as Fergal O’Brien faces Rod Lawler. The other two matches sees Alfie Burden going up against Tyler Rees and Louis Heathcote meeting Kishan Hirani.

Michael White will be the centre of attention in the evening session. He will be on the main table looking to make progress deeper into the event when he goes up against Jamie O’Neill. The streamed table could offer us a looking into the future as the young teenager Antoni Kowalski will look to back up his win in the first round when he faces a talented Elliot Slessor who has the burden of being the favourite on his shoulders.

Elsewhere we have a good looking match between Alexander Ursenbacher and Chen Feilong while Andrew Higginson meets Hayden Staniland. Mike Dunn enters at this stage of the tournament and he meets Kacper Filipiak with Nigel Bond going up against Eden Sharav in an even looking match. Sam Craigie has been touted to go all the way in this qualifying campaign and he gets started against the veteran Andy Hicks, with the other match in the session seeing Harvey Chandler taking on Jackson Page.

Chen Feilong showed his worth in the Championship League last month and he was in decent enough form to see off an Alexander Ursenbacher who can be hit or miss. The one thing we know about the Swiss player is he hasn’t had any competitive reps for a while and I certainly do think that could be significant over the course of the evening. Feilong took it to the likes of Kyren Wilson at the Championship League and was one of the more impressive players who never escaped his opening group. He looks to have continued that form coming into this event and at 2/1 he looks worth chancing.

Mike Dunn enters the scene on Thursday night and while he hasn’t played since the Championship League and wasn’t pulling up any trees there anyway, I do think he has the beating of Kacper Filipiak. The Polish player did well to come through a tricky opening round test against Andrew Pagett but he never made a 50 break in the match and I would wager he’ll have to score better against a canny opponent in Dunn. I wouldn’t call Dunn the most fluent of scorers but he isn’t the worst by any means, however he’s been around long enough that if the match gets scrappy it isn’t going to hinder him massively. I have Dunn a stronger favourite than the odds suggest here.

Back C.Feilong to beat A.Ursenbacher for a 3/10 stake at 3.00 with BetVictor