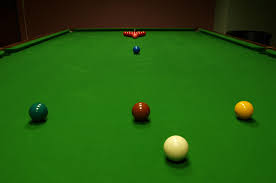 The second round of the World Championship qualifying competition comes to an end on Friday as the drama and tension begins to mount with places in the main draw at the Crucible Theatre later in the month getting ever closer for those involved.

This round sees some players whose tour lives are under threat taking on lower ranked players who are determined to make a name for themselves, and if Thursday is anything to go by, we’ll see a few tight matches and dramatic finishes.

Once again we have a full complement of matches over the two sessions of play on Friday and on the TV table in the afternoon session we have Martin Gould, a player who needs some results to stay alive on the tour, taking on the Moroccan Amine Amiri who will need something near his best here. The streamed table will see the veteran Dominic Dale in action. He goes up against one of few Chinese players in qualifying in Fan Zhengyi.

There are six matches on the outside tables over the course of the afternoon. David Grace faces Hammad Miah in one of them while John Astley meets Ian Preece in another of them. Mark Joyce will go up against the lowly ranked German player Simon Lichtenberg while Jak Jones will kick off his qualifying campaign against Jake Nicholson. The other two matches sees Sam Baird facing the Belgian teenager Ben Mertens and Liam Highfield taking on Alex Borg.

The evening session is going to be all about the 1997 winner of the main tournament as Ken Doherty kicks off his quest to make it back to the Crucible Theatre as a player rather than a broadcaster. His second round clash comes against Fraser Patrick on the TV table while on the streamed table we will see Sunny Akani going up against the German amateur player Lukas Kleckers in a match which could be one of the best of the entire day.

The outside tables are full in the evening session too and Jamie Clarke will meet Mitchell Mann on one of them while Jordan Brown takes on Rory McLeod on another. Two solid professionals meet when Craig Steadman faces Barry Pinches while both Lines players – Peter and Oliver are in action in this session too. Peter takes on Luo Honghao while his son Oliver meets Gerard Greene. The other match in the evening session sees Ian Burns facing off against Thor Chuan Leong.

This is a tricky day to bet on because most of the qualifiers for this round were lower ranked players and as a result there are a lot of short prices on the more established seeds here. There is one match where the seeded player is actually an outsider and I think he is a big price. That comes in the evening match between Jamie Clarke and Mitchell Mann, where I get that Mann is probably favourite because he has played and won a match, but Clarke feels a big price to me.

These two sit one place away from each other in the world rankings so this is entitled to be a tight match which makes me think the 13/10 on Clarke to win is just a shade too big. Mann beat Paul Davison in the first round but he only made one break over 50 in the match and that was only 52 so it wasn’t like he played brilliantly or anything. Clarke has a win over Mark Selby on his CV this season and at 13/10 there is enough in the price to warrant a bet here.