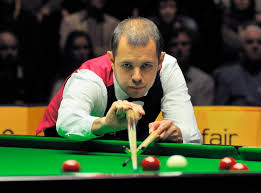 We have another day of Championship League Snooker to enjoy on Wednesday when two more groups take to the two tables as another eight players get their season underway with the aim of progressing through to the next stage.

We saw the great Ronnie O’Sullivan progress on Tuesday and the headline attraction looking to follow him through on the main table on Wednesday is the former world finalist Barry Hawkins. A pretty good support cast are in line though to make it an exciting day.

As expected Ronnie O’Sullivan cruised through to the second stage of the competition. He was clearly there to have a bit of fun but there was never any stage where anyone else in the group was going to come through. There was a surprise in the other group though when Fergal O’Brien edged out the top seed Michael Holt courtesy of the only century between the two in a group which was plagued by draws early on.

Unfortunately O’Brien won the group courtesy of winning his last match against Mark Lloyd 3-0. Lloyd had chances in that match so we were on the right lines backing him at the price which we did but the speed of the table kept on counting him out and O’Brien was just too wily for him in the end. That was the first loser for us in the tournament so hopefully we can make up for that by getting back to winning ways on Wednesday.

Table Two might be the home of the most competitive group on paper so far when the reigning Welsh Open champion Jordan Brown heads up a quartet of players who will all feel they have a chance to make it through to the next phase. Stuart Carrington is the second seed in this group and while he might not be one of the higher ranked second seeds he is more than capable of delivering the goods. Duane Jones and Michael Judge are the other two in the group and they will be buoyed by getting their cards back at Q-School.

Barry Hawkins is the standout performer on the main table on Wednesday but he is renowned as a poor starter to a season. The other three will be well aware of that and will fancy their chances of causing what would be a betting upset at the very least. The second seed is the home man Ben Woollaston who made the final group in the first year this format was used. Zak Surety is in the second year of his tour card but isn’t in the top 64 in the rankings so he could do with hitting the ground running here while Kuldesh Johal completes the group as an amateur having failed to get his card at Q-School.

For the first time this week I feel like we’ve got a couple of groups that we can have a real good look into. I’m tempted to take a go at someone in Group 2 but in truth you can genuinely make a case for all four men in it given that two of them will be buoyed by having gone through Q-School and got their cards. Winning momentum at this stage of a season is huge and only those who came through that competition have it. That makes me think the other group might be better.

I say that because I just can’t be having Barry Hawkins at the price. There is no doubt he’s the class act in the group but he never begins seasons well and didn’t when he was one of the leading forces in the game. I don’t see why that would change now. I like the Leicester man Ben Woollaston here. He went very well in the first of these Championship Leagues in this format and although he didn’t go as well last year he drew two of his three matches. He is more likely to be up for this and has the game to go well in it. I think the 5/2 in what looks a two horse race is good enough to me.

There isn’t a huge amount to lure me in as far as the match betting goes over these two groups. I did consider taking Jordan Brown to beat Stuart Carrington over on Table Two. They were in the same group in this tournament last year and Brown won their match 3-0 but I’m a little concerned that he has done nothing of any note since he won the Welsh Open. We often see players struggle after their first win and that appears to be happening with Brown.

Carrington made the semi-finals of the Gibraltar tournament last year and went well in the best of three Pro Series event too so it isn’t as though Brown has a massive advantage in the format. Of the other matches nothing really stands out to me without the draw in play and I’m not a fan of having it in play over such a short format so as far as betting is concerned on Wednesday I’ll stick with the group bet.