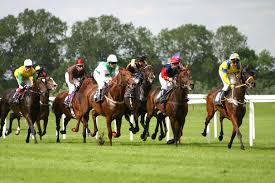 The big one is looming large on the horizon but before we get to Bootles Grand National day we have another day of racing at Aintree on Friday where once again a pretty decent cast list head to the Liverpool track to showcase their talents.

There is a mixture of novice races, graded offerings and big handicaps on the card on Friday and we are getting stuck into two of them as we look for some extra funds to go into battle against the National fences with on Saturday.

The opener on Day 2 is a Grade 3 handicap hurdle over two and a half miles which sees a maximum field of 22 lining up.  It’s not a bad thing to look for a horse from the lower end of the handicap that missed the Cheltenham Festival but, perhaps of more importance is the running style as hold up types are much suited on this flat track in big fields than those that like to force the pace.

Edwardstone & Monte Cristo are the 7/1 joint favourites at the time of writing but both had hard races at Cheltenham so it’s better looking elsewhere.  Irish raider Tronador is very lightly raced & should improve for his seasonal reappearance 3 weeks ago & he did run well in the Fred Winter at Cheltenham 12 months ago but he’s just a 5 year old & still has something to prove.

In such a competitive heat, we’re going double handed with the first being the well fancied Mister Coffey from a yard that has done well in this race.  He is unexposed having had just 5 starts over hurdles & looks capable of being much better than his mark.  The selection started this season with a convincing win at Sandown off 9lbs lower & then took a strong hold in a Listed handicap off 1lb higher where he could only manage 3rd.  The sedate pace & heavy ground probably didn’t help his chances.   He stepped up on his last run when 7th of 23 in the Betfair staying on really well despite not having the run of the race.  The fast pace here will suit, it’s just a question of whether he gets the trip but, if he does, he looks primed to go well.

Our second selection is Jacamar who’s been off the track for 59 days since finishing midfield in a jumpers bumper at Kempton.  He’s another who missed Cheltenham & likes to be held up but also has the added bonus of having won over course & distance.  That was early in the campaign off a lower mark where he came from the back & kept on strongly to prevail by a length.  He’s since won again, at Wincanton, over a furlong further than this where he was value for more than the neck margin at the line.   Admittedly he’s up in the handicap but strikes me as a progressive type.   This sort of race (big field, flat track, trip) looks ideal & he’s overpriced especially when we can get 7 places in the each way market.

We get a good look at the National fences as 28 go to post for the Topham & what’s clear here is that you need a horse that can jump &, ideally, one that has been over these fences before.  Cheltenham form, as well as the classier higher rated horses, should also be followed.   Willie Mullins saddles the favourite in Livelovelaugh, a horse that has got round in the National itself, & whilst he holds a great chance, I’m a little put off by his mark.    Visioman has been well backed in the past 24 horses & hails from the De Bromhead yard with jockey of the moment Rachael Blackmore aboard but the value has all but gone on him.

Again we’re siding with 2, the first of which is Caribean Boy who finished 7th of 21 behind The Shunter in the Paddy Power Plate at Cheltenham over a similar trip to this.  He’s lightly raced over fences with just 6 starts but with 2 wins to his name, he leaves the impression there’s more to come.  He won a Grade 2 Novice Chase on debut this season before finishing last of 3 behind top class Dashel Drasher on heavy ground at Ascot.   The ground was again an excuse next time out but he improved significantly at Cheltenham where he jumped well & stayed on to good effect.  Dropped 1lb in mark, he could progress again especially as the field will suit, he typically jumps well & hails from a yard that does well in this race.

Our second bet comes in the form of Modus & his claims are underlined by his last run, 4 months ago, when he finished 3rd in the Grand Sefton over course & distance.   The fact he’s been over these fences is a massive plus & he was only 6 lengths down at the line yet gets in here off the same mark.  Previous to that, he won over the Mildmay Chase so clearly has a liking for Liverpool & Aintree.  His absence can be put down to the ground & he’s one of few that will relish the quicker conditions.  With a good strike rate over fences (3 wins from 11 starts), a liking for the fences & the fact he comes here fresh, he looks a really good each way bet with 7 places on offer.