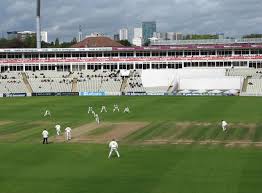 The second stage of the County Championship season begins on Monday which means the six teams that are in the top flight of the competition start their quest for the title. With just four matches remaining each one carries extra significance so we’re in for a very competitive week.

We were meant to get the week going with a nine match card but that is down to eight after Surrey were unable to take part in their fixture against Durham. In order to watch these games we have to head to the county streams, but as we’ve seen all season they are plenty good enough.

The top flight is where the county champions will be crowned and the pick of the matches this week sees two group winners battling it out when Somerset host a Nottinghamshire side who will be smarting after their exit to Hampshire in the Vitality Blast on Wednesday night. Hampshire will look to build on that win when they host Yorkshire at the Ageas Bowl this week. The other match comes from Old Trafford where two losing Vitality Blast quarter finalists, Lancashire and Warwickshire, embark on their last chance for glory this term.

This is where the Durham against Surrey match was due to take place but with it not going ahead we are left with just the two matches in this division this week. In essence the teams in this division are only playing for prize money but you would hope the games would still be competitive. Essex can no longer make a successful defence of their title but they can finish the season well. They begin Division 2 with a trip to the Royal London One Day Cup winners Glamorgan. The other match sees Gloucestershire hosting Northamptonshire at Bristol.

This is the division where the lowest two teams in the three groups in the first phase are now housed. If there is anything to play for here then it would be to avoid the wooden spoon. In terms of profile of the teams involved, the pick of the matches is the one at New Road where Worcestershire take on Sussex. Middlesex welcome Derbyshire to Lord’s in another of the matches while the other will see Kent, buoyed from their win in the Vitality Blast quarter final on Friday night, going up against Leicestershire up at Grace Road.

I’m not going to go too mad in this first round of matches because it has been the better part of a couple of months since the counties last played red ball cricket, and in some cases it has been a few weeks since they have played cricket of any kind, so I’ll let everyone settle back into the format again before going stronger over the final three weeks of the campaign. There is one bet that I like this week though which comes from the match at New Road.

Sussex have named a young squad for this match as they have done for much of the season. It is a squad which hasn’t got senior players in Travis Head and Stiaan van Zyl around as both have left the club now. It also doesn’t have regular captain Ben Brown as he is out with injury so there are a lot of youngsters being blooded. Worcestershire have named their strongest squad for this match and appear to have the motivation of continuing to improve their four day credentials. I think in the lower two divisions any motivation is going to be important given that the title isn’t available in those leagues. Worcestershire have that and the much stronger looking squad so the 4/5 on them to win here looks very good.

Back Worcestershire to beat Sussex (DNB) for a 3/10 stake at 1.80 with William Hill