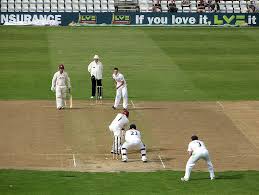 There is one more LV= County Championship match to get underway this week and it does so on Monday when Sussex play host to Middlesex in Division 3 in a match which pits one of the smaller counties up against one of the bigger ones.

As with all the matches in the County Championship, there is no TV coverage of this game but the excellent live streams can once again be our friend and the Sussex one tends to be particularly good which is helpful.

You get the impression Sussex are just playing out time on their red ball season. Their campaign is all about a week on Saturday from here on in and they aren’t going to do anything to impact negatively on that. Sussex have been using the red ball game to blood their youngsters for a while now. They started that philosophy in the Bob Willis Trophy last season and have maintained it this term. You get the feeling it is a plan they will use under the two divisions and promotion and relegation come back into this competition.

Sussex looked like they were on course for a win to open up their Division 3 campaign last week but they couldn’t get the better of a strong Worcestershire on the final day and in the end they allowed their opponents to chase down 314 to lose by six wickets. There were positives to come out of the match but the obvious negative was the lack of a ruthless streak to win the game and moving forward that is something they’ll be looking to develop.

This had been a pretty wretched season for a Middlesex side who pride themselves on being a good red ball outfit. The fact they have signed Mark Stoneman now ahead of next season suggests they know that they haven’t been good enough this term and are intent on doing something about it over the next three weeks. They have also brought Toby Roland-Jones back from injury too when it would have been easy to sit him out for the remainder of the year to make sure he’s in good order next term.

That all paid dividends last week when they got the better of Derbyshire with Roland-Jones returning to the scene with a five wicket haul in the second innings. Stoneman hasn’t yet got up to speed but he’s a class act so it shouldn’t be long before he makes his appearance in this talented Middlesex batting line up count. Middlesex bat deep and do not lack for bowling options so what they are doing in Division 3 of this competition only they will know.

Sussex are going to go into this one slightly stronger than they did for the match against Worcestershire. They welcome their captain, Ben Brown, back into the fold while Delray Rawlins and George Garton are also in the squad.

Middlesex have named the same XI in their squad as won against Derbyshire last week while Blake Cullen, Tom Helm and Luke Hollman make up the 14 who will travel to Hove so they certainly don’t lack for bowling options.

Sussex look to have a better squad at their disposal here but I’m not convinced it is good enough to contain this Middlesex side. The only question mark you would have over Middlesex is whether they have enough runs in them which sounds stupid for a team with Mark Stoneman, Sam Robson, Stevie Eskinazi and Max Holden in their ranks. They should be good enough to put up sizeable totals and from there the Middlesex bowling attack can take over.

The thing about Sussex is although they have three more senior players back they won’t have played much long-form cricket for a while so although they will probably be fine on the opening day or two they might wilt as the match goes on, much like we saw their youngsters do last week. Middlesex just look too balanced and have too good a bowling attack for Sussex to be confident about their chances. I like the visitors here.

Back Middlesex to beat Sussex for a 3/10 stake at 1.91 with William Hill