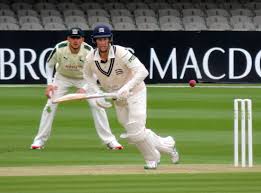 The second month of action in the LV= County Championship begins on Thursday when the fifth round of matches take place up and down the country on a week where those in action will reach the halfway mark of the first stage of the campaign.

The three group takes are starting to take shape now and the battle for the top two in each is on in earnest. As a bonus for the week we have the first televised action of the season which has been hastily arranged after the IPL was cancelled.

There are only two matches in Group 1 this week with the leaders Warwickshire looking to bounce back from the mauling they suffered at the hands of Durham last week when they host rivals Worcestershire, who begin the week in third place and will look to take advantage of second placed Durham not playing. The champions Essex are now languishing in fifth place in the group and need to get a winning run together if they are going to push for the title once again. They head to Trent Bridge to take on fourth placed Nottinghamshire.

This is the group from where the televised action comes as the leaders Gloucestershire make the trip to Lord’s to take on a Middlesex side who are going to need to go on a winning run if they are going to make it through to Division 1 of this competition. Hampshire were the early frontrunners in this group but a hefty loss at Surrey last week has sent them down to third place. They play host to Somerset this week with the beaten finalists of last season now up to second place. The other match comes from Grace Road where Surrey will look to build on their emphatic win last week when they make the trip to take on lowly Leicestershire.

Yorkshire and Lancashire have separated themselves from the rest in Group 3 and they will look to maintain that dominance when they are in action this week. Both have home assignments too with the leaders Lancashire meeting Glamorgan while Yorkshire face lowly Kent at Headingley under something of a cloud from the Azeem Rafiq investigations not going anywhere. The other match sees Northamptonshire and Sussex looking to take advantage of any slip ups from the top two when they meet at Wantage Road.

I’ll stick to the TV game for a bet this week where Gloucestershire look a good bet to me at even money in a match where they take on a Middlesex side who seem to be finding it hard to get over the line, even when they have been dominant in matches. Their only win this season has been against a Surrey side who until last week were pretty ordinary themselves so for as well as Middlesex have played they haven’t got a lot to show for their efforts.

Gloucestershire have won three of their four matches this season and came away with a draw in another one so they are going along very nicely at present. They have scored 300 in each of their matches whereas Middlesex have been shot out for less than 150 in all three matches they have been beaten in this term. Gloucestershire have a full strength pace attack to take to HQ with them here and with a batting unit that has all contributed I expect them to come out on top over the four days.

WON – Back Gloucestershire to beat Middlesex (DNB) for a 3/10 stake at 2.00 with Betfair