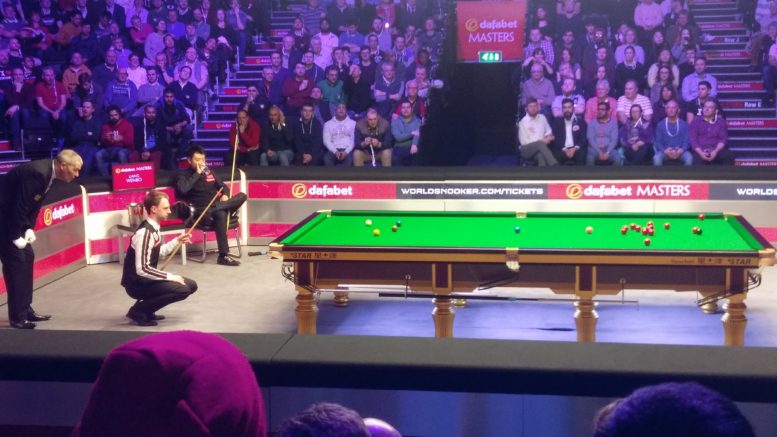 The evening match at The Masters sees two men who are no strangers to competing in the competition battling it out inside the Marshall Arena in Milton Keynes as Mark Selby takes on Stephen Maguire for a place in the quarter finals.

Selby has won this great title on three occasions whereas the furthest Maguire has ever gone is the semi-final on four different attempts. Both players will be eyeing up a spot in the last eight where Neil Robertson could be waiting for the winner.

After looking in a bit of a slump in his game around 18 months ago, Mark Selby has come to life again and he has already lifted two pieces of silverware this season having won the European Masters and the Scottish Open. He has also been to the semi-finals of the English Open, the Champion of Champions and the World Grand Prix, all of which have come after he was so close to making the world final last term.

Selby is clearly in a good place with his snooker at the minute and the one thing that is immediately apparent is how well he is scoring at present. He has made 34 centuries already this season and is within 15 of his total of last term with half the campaign remaining. We know that Selby is one of the best tactical players and has a safety game that is the envy of most so when he puts in strong scoring into the mix it is not hard to see why he is picking up titles.

While Selby is making huge gains in the sport this season, it is very much the opposite for Maguire who hasn’t been past the last 32 of any tournament he has entered this term. You can’t say that he doesn’t like the behind closed doors setup because he won the Tour Championship in that surrounding last season playing some incredible snooker, so whether the lockdown and restrictions have affected his mentality remains to be seen.

In a lot of ways Maguire has the ideal situation here. He is on a big stage with not a lot to lose in terms of the fact he isn’t fighting for any ranking points or anything like that and if he can find his best game, which so often the better players do on the biggest stages, then he has a right to be competitive here. If Maguire can start well and put some breaks together and build some confidence there is no reason why he can’t lay a challenge down to Selby at the very least.

There have been 18 previous meetings between these two players with Selby predictably having the upper hand in them with 10 wins to the seven of the Scot. They have also played out a draw in that time. The frame count tells a story though as Selby leads by 13 at 84-71 and when you think he has only won three more matches that suggests when he does win he does so very comfortably. It was Maguire who won their last meeting which was in the Players Championship in 2019. That was in a deciding frame. This will be their fourth battle at The Masters with Selby winning 6-5 in the 2008 quarter final and 6-3 in the semi-final of 2010. Selby also won 6-2 in the first round in 2019 so history is on the side of the Englishman.

It is hard to go against Mark Selby here. I’m not a massive fan of taking favourites to cover heavy handicaps in this tournament as effectively it is the best against the best and these two certainly live up to that billing, but form has to be taken into account and there is no doubt that Selby has been a mile ahead of Maguire in that department this season, which offers up more confidence that he can not just win this match but cover a 2.5 frame handicap in the process, essentially winning 6-3 or better.

Further encouragement can be taken from the last four Selby wins in this particular fixture. They have been 6-3, 6-2, 5-1 and 6-2, the latter being in this tournament a couple of years ago when he banged in three tons and two more breaks over 90. Selby is hard to beat at the best of times but when he is scoring like he has done this season he is even harder to stop. He blew away the post-Christmas cobwebs in the Championship League last week and should come through nicely here.