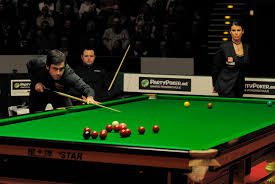 We have reached Moving Day in the Welsh Open as two more rounds of action take place in the last of the Home Nations events of the campaign on a day where 32 men are whittled down to just eight inside the Celtic Manor in Newport.

The last 32 of the competition takes place in the morning and afternoon sessions and if you win you come back in the evening for the last 16 after which we will know the identity of the quarter finalists where most people think the tournament goes up a level. Time restrictions will deny us the chance to preview the last 16 but we’ll have a proper look at the last 32.

The home favourite will be on the TV table in the first session of the day as Mark Williams takes on his good friend and one of the four outright picks we have got that have made it through to Thursday in the form of Joe Perry. There is another of our outright bets on the streamed table too when Yan Bingtao takes on his fellow countryman Xiao Guodong in what could be a really good match with those two playing some nice stuff at the minute.

There are six other matches in the session and some real big names are being farmed out to the outer parts of the arena. Mark Selby is the biggest of them. He has a date with his fellow Leicester potter Joe O’Connor while Barry Hawkins is another on show. He meets Anthony McGill with Stephen Maguire another of the top 16 players away from the cameras. He faces Matt Selt. The other three matches sees Martin O’Donnell taking on Pang Junxu, Jordan Brown going up against Alexander Ursenbacher and Jak Jones faces Mark King.

The defending champion Shaun Murphy is the first man up on the TV table in the afternoon session. He takes on the other home hero who will be looking for successive ranking event titles in the form of Ryan Day, who came out on top in the Shootout earlier in the month. Over on the streamed table we have the world number one Judd Trump. Such is the standard left in he can only get onto table two for his match against Hossein Vafaei.

Four other matches take place first up in the afternoon with more big names on show. Jack Lisowski goes up against Ricky Walden in one of them while the Champion of Champions winner Mark Allen is another. He meets Scott Donaldson while Kyren Wilson takes on Tom Ford in a really good match. The other match sees our final outright pick Zhou Yuelong meeting Dave Gilbert in a game which could have Sheffield implications.

Two matches are saved for second games on the main tables in this session. On the TV table the world champion Ronnie O’Sullivan faces his toughest test of the week when he plays his practice partner Martin Gould. Over on the streamed table two former winners of this competition will battle it out when John Higgins goes up against Ali Carter for the right to take on Allen or Donaldson in the last 16.

Two bets catch my eye in this third round with the first of them being the Swiss ace Alexander Ursenbacher. He faces Jordan Brown who I actually like as an improver but I also like flair to win the day in these matches and it is the man from Switzerland who has more of that. He showed that with some nice breaks in his win over Robert Milkins in the previous round. To be fair Brown had a decent win over Sam Craigie in the last round but he can be a little too open for his own good at times. These two are both going to climb the rankings in the months to come but Ursenbacher can make the first move here.

I’m not a fan of backing my outright bets during the tournament as one bad day and two bets bite the dust but the fact that the quarter of Zhou Yuelong hasn’t broken up at all in terms of the fact that Ronnie O’Sullivan, John Higgins and Mark Allen are all still in it makes me think it is unlikely he is going to go all the way. Therefore I’m happy to try and get some money back by backing him to beat Dave Gilbert first of all and then take my chances with a free shot against those previously named should be see off the challenge of Gilbert. I think he will do that. Yuelong hit three centuries in his 4-0 win over Anthony Hamilton in the previous round and while Gilbert has played well this week his form in recent times hasn’t been that great. Both men are yet to drop a frame this week but it is the Chinese star I think will get to four first.

Back A.Ursenbacher to beat J.Brown for a 3/10 stake at 1.91 with William Hill