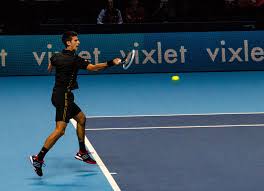 The quarter final line up at the Australian Open will be confirmed on Monday when the bottom half of the singles draws get played out on the main courts on another decent looking day of tennis at Melbourne Park.

We saw plenty of shocks over the course of the action on Sunday and it will be interesting to see if that trend continues on Monday or whether the established stars such as Novak Djokovic and Aryna Sabalenka make it through.

It is singles action all the way in the day session on Monday and we begin with possibly the pick of the women’s matches on the day as Aryna Sabalenka goes up against the Adelaide champion Belinda Bencic in what should be a great contest. When they are done we see the fourth seed Caroline Garcia look to make a second straight Grand Slam quarter final when she meets Magda Linette. The day session concludes with Andrey Rublev going up against Holger Rune in what looks like the pick of the matches on the day.

There is just the one match in the night session on Monday in terms of singles action and it sees the one remaining home player left in either singles draw on show as Alex de Minaur takes on the man who is the overwhelming favourite to lift the title on Sunday in Novak Djokovic. He has got himself in an injury cloud though so all eyes will be on him to see how he handles his troublesome hamstring.

There are two singles matches submerged with the doubles action in what is a good looking day session over on the Margaret Court Arena. Once one of the doubles matches are done the women’s singles match between Donna Vekic and Linda Fruhvirtova will deliver an unseeded quarter finalist. Another doubles match follows that one and then when we get back to the singles Roberto Bautista Agut will look to make the last eight of another Grand Slam at the expense of Tommy Paul.

That all leaves with two singles matches away from the two main courts on Monday. It is mostly doubles action over on the John Cain Arena but the third match on the card is a men’s singles clash between two unseeded American players when J.J. Wolf takes on Ben Shelton in what is a massive opportunity for both men. Over on the Kia Arena a doubles match starts the day off but second on the court is a women’s singles clash between the big serving Karolina Pliskova and the Chinese player Shuai Zhang.

I did have my eye on Linda Fruhvirtova who has done a couple of good turns for us in this tournament so far but she looked to be carrying a groin issue towards the end of the previous round and with that in mind I’ll pass her over even though I think she’s a huge price to beat Donna Vekic if she is fully fit. Those doubts make me head to the men’s draw where I like Tommy Paul to see off Roberto Bautista Agut in what should be a good match.

Paul had a really good win over Jenson Brooksby in the previous round where he dropped just eight games in total. The American beat his Spanish opponent indoors in Paris towards the end of last season and I fancy he’ll have his number once again. Bautista Agut looked like he was going to be involved in a humdinger of a battle against Andy Murray in the previous round until the Scot understandably ran out of legs. He went five sets in the previous round and could be vulnerable to the younger and fresher man. There is no reason to believe this will be an easy contest but the longer it goes the more I fancy Paul to come out on top.