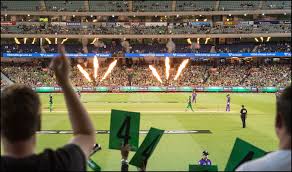 The final Ashes Test match might be going on through the day and into the evening out in Australia but we still have a double header of action in the Big Bash League to enjoy and that starts with a huge clash between the Adelaide Strikers and the Melbourne Stars.

At this stage of the competition there looks to be one place left in the top five and these two are the closest challengers for it, however with matches running out only one of these will be in control of their own destiny after this game.

At no stage has this been a vintage season for the Adelaide Strikers but the one thing they have done despite their poor run of results in the early stages was to regularly pick up the Bash Boost point. That kept them in contention should the time have come along where they were able to put some results together and that is exactly what has happened in the last two games. They have kept their campaign alive with wins over the Brisbane Heat and Perth Scorchers and a third win here will put them in a great place to make the finals.

One thing the Strikers have to guard against is the struggle to back up from one day to the next. I’m sure people are getting bored of me mentioning it throughout these events across the world but it is a big thing. This is an intense format of the game and it is hard to back up and that is what the Strikers will need to do here. The one good thing is that their bowlers will be full of confidence after restricting the Scorchers on Thursday.

It isn’t just the Adelaide Strikers who kept their season alive in their last match, the Melbourne Stars did exactly the same when they took care of the Melbourne Renegades in fine style. Although this hasn’t been a fantastic campaign for the Stars so far, they do have the caveat of the fact that they were ravaged by Covid midway through it. They have come out of the other side now though and will be looking to win this and maximise their chances of reaching the finals.

With that in mind, it is hard to assess the Melbourne Stars. When they have been understrength they have been heavily beaten though and that has had a detrimental effect on their net run rate and that might be something they need to address over their final three matches, although if they lose here that might not matter as it could be curtains for their season. Melbourne need their very best here so it is important that they have all of their big names back.

You wouldn’t expect too many changes from the Adelaide Strikers here from the side which won on Thursday, not least because the pool of available options on the sidelines aren’t exactly strong. Matt Renshaw remains out with Covid which isn’t ideal.

Melbourne Stars are without Haris Rauf now but Ahmad Daniyal and Syed Faridoun are both in the squad. Just as importantly Marcus Stoinis has been named in the 16-man party for this game and he could replace Nick Larkin in the side.

I took the boundaries here on Thursday and I was well on the way to getting plenty from the Perth Scorchers in the first innings until their complete lack of depth got the better of them and me but I don’t think we will see that happen here with the Melbourne Stars. I say that for a couple of reasons. The first one is that there is a lot more depth to this Stars batting unit right now. Had we known in advance that Ashton Agar wasn’t going to feature on Thursday then I might have bet differently but c’est la vie.

The other reason why I like the boundaries here is Melbourne Stars won’t just want to win, they’ll look to win as quickly or by as big a margin as they can to repair some of the damage that was done to their net run rate during the times they were without their starters due to Covid. The other reason I like the boundaries here are the ‘gun bowler’ from each side is missing. There is no Rashid Khan or Haris Rauf taking eight overs out of the game. We saw a very short boundary here on Thursday and will be on the same pitch here. There were 29 boundaries in a match which didn’t contain a score above 130 on Thursday. If this is even just average scoring for this ground this line covers.