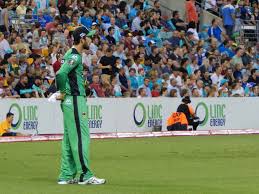 An exciting last three days of the Big Bash League regular season begins on Monday when the Hobart Hurricanes look to keep their campaign alive when they take on the Sydney Sixers at the Blundstone Arena.

The Sixers know that whatever happens in this one which is their final regular season match, they will head to Perth for the Qualifier at the weekend. Hobart need to win here to keep their postseason hopes in their own hands.

The pressure is really on the Hobart Hurricanes now. A squad with the quality that theirs possesses should not be in the position of potentially needing to win their last two matches to make it into the postseason but that is where they find themselves. There is an outside chance that they get in with one win but that would require a lot of results going their way so really they need to win this and then take down the Brisbane Heat on Wednesday.

If that is going to happen then they need their top six to all start firing. There is enough firepower in their top order to blow any team away but we just haven’t seen it often enough this season. We also haven’t seen enough from their bowlers consistently throughout the campaign but even allowing for that a top six of Caleb Jewell, Ben McDermott, Zak Crawley, Matthew Wade, Tim David and D’Arcy Short should be doing a whole lot better than they are.

There aren’t many teams in better form than the Sydney Sixers right now and even with a match to spare they know they will have two bites of the cherry to get into the final should they need them. They will be looking to head to Perth with another win to keep their confidence and their momentum and based on how they have played recently then you would imagine that is perfectly possible here.

One area of concern which is beginning to develop is Steve Smith has been in incredible form for the Sixers. That in itself isn’t as issue but he has scored centuries in his last two matches and nobody else has really seen much of the bowling so Sydney need to ensure someone is ready to step up to the plate should the unthinkable happen and he gets dismissed early. The big positive for the Sixers is that their bowling has come to the party at a good time.

Tim David has found his form with the bat and while he couldn’t get the Hobart Hurricanes home against the Brisbane Heat last time out, in that situation you would back him to win more matches than he loses. Hobart will hope he wins this one for them.

Steve Smith has successive centuries in this tournament and he’ll be looking for a load more runs to boost his confidence going into the Test series in India next month. We don’t know if this is his last game of the season but if it is he’ll be keen to go out in style.

I have never been a subscriber to the ‘must win will win’ school of thought but I do think it carries a little bit of weight in this match. The Sydney Sixers are in the position where they are going to Perth on Saturday whatever happens here so given that their previous match was as recently as Saturday it wouldn’t be the biggest surprise if they give a rest to a few key players, especially any bowlers who have had a strong workload in recent weeks.

Even if they don’t, the Hobart Hurricanes don’t lose many matches on this ground and indeed all four matches they have played here this season have resulted in wins for the ‘Canes. When you consider they have only won five all season that shows how comfortable they are playing here. Their batters know exactly where to target in terms of boundaries while their bowlers use the conditions well too. It would only be natural if the Sixers subconsciously ease up a touch here and against this powerful Hurricanes unit that could be costly.

Back Hobart Hurricanes to beat Sydney Sixers for a 3/10 stake at 2.30 with William Hill