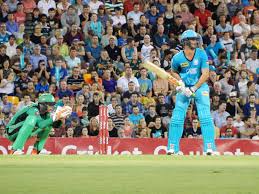 The final match of the regular season in the Big Bash League could yet be a pivotal one on Wednesday when the Melbourne Stars play host to the Sydney Thunder in the second part of the double header.

Should Hobart have won the first match on Wednesday then the Thunder will need to win this to make it through to the latter stages. If they haven’t Sydney will be through and can relax here. The Stars conclude their campaign in this match.

With just three wins from 13 matches this certainly hasn’t been anything like the season the Melbourne Stars would have had in mind when they set out on their journey. The injury to Glenn Maxwell certainly didn’t help their cause but nobody can argue that three wins is good enough even allowing for his absence and an injury to Marcus Stoinis along the way. The only thing they can do now is win this match and at least offer some joy to their fans.

To be fair to the Stars, in the last six matches they have been competitive in each of them, going down by narrow margins but in a way that is a sign of a poor team. They can’t seem to get over the line in these close matches. That is kind of understandable when the pretty of competition is on the games but when they are playing for nothing it is less acceptable. If they can free the shackles then they are playing well enough to get a consolation win here.

It might be that the Sydney Thunder are already into the postseason by the time they play this match. If they are they will be preparing for a trip to Melbourne to take on the Renegades but if they are not then the pressure is going to be right on them here. They have not found any consistency throughout the campaign and the huge margin of their defeat to the Sydney Sixers at the weekend has left them extremely vulnerable.

The batting just hasn’t functioned on enough occasions for the Thunder. When it hasn’t been functioning it has been terrible and not even giving them a chance to win matches and it is hard to win games with no runs on the board. They have to find a way to put a score on the board in this one especially if they have to win to stay alive. In the main their bowling has gone well but even that disappeared when they needed it most on Saturday.

We saw all the power that Marcus Stoinis has in his repertoire in Brisbane last time out and with no competitive pressure on his shoulders here it wouldn’t be a surprise if he delivers the sort of blitz that could have the Stars right in the game.

Dave Warner won’t be around much longer for the Sydney Thunder and he hasn’t really done a huge amount since he joined up with the squad. He would like to make an impact here especially if this is a game the Thunder have to win.

These two met in one of the earlier games in the season when the Thunder literally fell over the line even though they were chasing a nothing score. It is fair to say that in the main their batting hasn’t really improved since then and I would worry for them here. If they are already through then subconsciously they might switch off and surely anyone with niggles will be left out because there isn’t a huge amount of time between this one and the Eliminator on Friday night.

I would really fear for the Thunder and their batting if the pressure is on them here and I think the Melbourne Stars can take advantage of that. They are on a poor run of form but they have been so close in a number of matches and they only needed a ball or two to go their way and they would have won a few of those games. I think they can take advantage of a side whose batting has looked shackled by pressure all season and can end their campaign on a bit of a high.

Back Melbourne Stars to beat Sydney Thunder for a 3/10 stake at 2.38 with William Hill