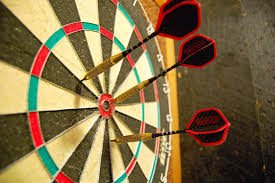 The opening day of the European Darts Open takes place on Friday when the 32 qualifiers will face each other in Leverkusen with each man looking to win and set up a showdown with a seeded player in the last 32 on Saturday.

We might only have the qualifiers in action on Friday but we still have plenty of decent names to keep us entertained throughout the two sessions of play out in Germany, on what does actually look one of the better opening days we’ve seen for a while.

Usually we would have eight matches in the afternoon session but the withdrawal of Danny Baggish prior to the event began means we are down to seven. It gets going with Mickey Mansell taking on Luke Woodhouse before two men who don’t get to showcase their talents at this level very often meet as Darren Penhall takes on Luc Peters. We get taken to the interval by the runner up in the third European Tour event of the season, Martin Lukeman. He takes on Dennis Nilsson.

Two of the better youngsters on the circuit bring us out of the interval when the exciting Josh Rock takes on Connor Scutt before the Czech young star Adam Gawlas continues his rise through the ranks when he meets Scott Williams who has been impressive in the Players Championship events this season. Our pre-tournament outright pick Keane Barry is in action in the penultimate game of the afternoon when he faces Krzysztof Kciuk before the session concludes with a match between Andrew Gilding and Lukas Wenig.

Devon Petersen was seeded for most of the European Tour events over the last two years but he isn’t here so in order to reach the last 32 he’ll need to beat the Dutchman Kevin Doets when he opens up the evening session. Stephen Bunting was a semi-finalist in Graz last week and he is in action in the second match on the stage when he takes on Maik Kuivenhoven before an all-Irish battle between Daryl Gurney and Kevin Burness takes place. Berry van Peer and Jermaine Wattimena will meet to take us into the break.

We come out of the break with the WDF World Championship semi-finalist Cameron Menzies on show as he faces the more established Ian White. The final three matches each have a home player in them. Martin Schindler is the first of the German trio to take to the stage. He meets Ritchie Edhouse before Rowby-John Rodriguez faces Nico Kurz. The final match of the evening might just be the pick of the opening round clashes as Dave Chisnall takes on Gabriel Clemens.

I’ll take a couple of bets over the course of the opening round, both of which come in the evening session where I’ll take Kevin Doets to start the night with a win over Devon Petersen. We haven’t really seen much of the Dutchman in terms of the TV events but those who follow the floor tournaments and the circuit as a whole will have seen him go well in a Players Championship event earlier in the season where he made the semi-final and had the likes of Jose de Sousa, Damon Heta and Adrian Lewis as his victims. In all on the floor this season Doets has hit four ton plus averages and another eight of 95 or more. That is good scoring and that could well do for Petersen who has not been past the second round of an event this season and who lost in the first round in Austria last week with an average in the 80s. In 18 matches on the floor the South African has one average of 97 or more and just five wins. Doets looks a good thing here.

I’ll also take Gabriel Clemens to win the final game of the evening when I think he can ride what might be a boisterous crowd by the time his match with Dave Chisnall takes place given that two home players compete in the two contests prior to this one. Clemens can be a little hit and miss but when he’s good he’s very good. I guess you can say the same for Chisnall however it is the German who brings better form into this tournament with him. He made the semi-final of the last Players Championship event and then made the last 16 of the Austrian Darts Open last week where he went down to Rob Cross in a deciding leg. Chisnall made a semi-final of a floor event earlier in April but hasn’t really delivered the goods in the European Tour events so far by his standards. These two have met twice in the past with Chisnall winning 6-5 on both occasions but with Clemens confident and offering good form he could be value to reverse that score in a good looking conclusion to the day.