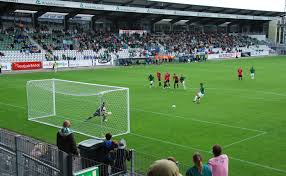 The first MLS weekend back from the international break concludes on Sunday evening when the last four matches take place up and down the country with action coming from both of the Conferences.

Two of the four matches will be live for us to enjoy across the TV channels which cover this league in the UK, while the other two games will be available with the bookmakers. They are all at watchable times too which is handy.

Sunday’s fixtures are as follows: (UK kick off and TV in brackets)

OPEN AN ACCOUNT WITH 888SPORT AND BET £10 TO GET £30 IN FREE BETS PLUS A £10 CASINO BONUS! PERFECT OFFER TO USE ON THE MLS! CLICK THE IMAGE BELOW TO JOIN. USE CODE 30F. NEW ACCOUNTS ONLY. 18+ T&Cs apply (See image for significant terms). Gamble Aware.

The televised action starts the evening off when two teams from the Eastern Conference collide when former MLS Cup champions Atlanta United play host to a very inconsistent Inter Miami outfit. The second of the TV games sees the reigning champions New York City FC on show. They begin life after Ronny Deila when they play host to a Colorado Rapids side who topped the Western Conference table last season, but who haven’t travelled too well this term.

The Supporters’ Shield holders New England Revolution are in action in the first of the two non-televised matches to kick off. They will be looking to improve their position in the Eastern Conference when they welcome an up and down Minnesota United side. The other match comes from the Western Conference where Nashville SC will be looking to make the most of home advantage when they go up against struggling Sporting Kansas City.

The final match of the weekend is the one which interests me here where I expect Nashville SC to take care of a Sporting Kansas City side who don’t travel particularly well and whose poor first half of the campaign has left them rooted to the foot of the Western Conference table. That includes a defeat last week to New England, which while not a bad result necessarily, if they are not winning matches at home then it puts even more pressure on their indifferent away form.

After a 0-0 draw which they completely dominated in running up an xG of 1.80 against the San Jose Earthquakes, Nashville SC are now unbeaten in 25 home matches. The Music City is one of the toughest places to go on the MLS circuit and the men in yellow will have Walker Zimmerman back from international duty here which will be a further boost to their chances. Kansas City cough up chances at will and I don’t believe Nashville will let them pass them by two weeks in a row. I fancy a relatively comfortable home win here.