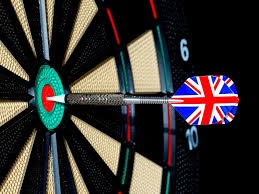 The Premier League Darts event leaves the shores of the UK on Thursday when Week 12 of the competition takes place out in Dublin. This has the makings of a pivotal night of the season with the way the fixtures have dropped too.

The top four are beginning to look tough to reel in and certainly the bottom two need to make inroads over the course of this week but the other two on the outside looking in could do with making up some ground too.

The opening quarter final in Dublin sees third place in the overall table taking on second when James Wade goes up against Michael van Gerwen, with the winner knowing that they will have the throw throughout the remainder of their existence in the evening.

These two have met four times in the Premier League this season with van Gerwen having won three of those matches to the one of Wade but we know from the World Grand Prix that Wade enjoys this part of the world and I wouldn’t be surprised if we see a strong performance from him, especially now he is in a nice position to qualify for the final night. I sense this is a bigger match for MVG though. He’ll want to top the table as he always does. He might well win this but Wade is playing well enough to be respected. I’ll leave this one alone.

Two men who are currently outside the top four in the overall table meet in the second of the quarter finals in Dublin as Gerwyn Price takes on Joe Cullen in what is a massive match in the scheme of the remainder of the season.

These two have only met twice in the tournament so far but surprisingly it is Cullen who prevailed in week two and week eight. The second of those victories is more understandable because Price has been suffering with a hand issue since an early stage but that hadn’t come along before Cullen won their first meeting. We are seeing a very inconsistent Cullen at the minute and given that Price has the throw you would expect him to win here, however Cullen clearly enjoys playing the Welshman because their head-to-head read 6-6 without those two Premier League wins. This feels like one to leave alone.

The bottom two meet in a massive third quarter final of the evening when Michael Smith takes on his former mentor Gary Anderson in a match where the loser won’t be mathematically eliminated from the competition but will need a miracle to make it into the top four.

One of the reasons for that is they both carry poor form from the Premier League over to Dublin with them. Smith has lost his last five in this competition while Anderson has lost his last four so something is certainly going to have to give in that regard here as they can’t both lose this match. Given that he has the throw and has probably been the more unlucky of the two in terms of putting in better performances in that time without reward. Nevertheless, you would imagine this is going to be a nervy match given the consequences of the situation and I could do without having my money on that situation. I’ll leave this alone.

The last of the quarter finals sees the other two men currently occupying spots in the top meeting when the league leader Jonny Clayton will look to back up his win from Aberdeen last week when he takes on Peter Wright, the match he beat in the semi-final on his way to that success.

These are two of the best players in the world at the minute and we should be treated to a good game of darts between them. Such has been the success of the two in the Premier League this will be the fifth time they have met in it this term. Wright won 6-1 on the opening night but it has been all Clayton since then including that win last week. With the throw you have to respect Clayton here but at the same time Wright has gone back to his World Championship winning darts and I expect a massive improvement in him from here on in. Their last two meetings have contained eight 180s in them each and I expect this to be quite tight regardless of who wins so over 5.5 180s looks the way to invest in this one.