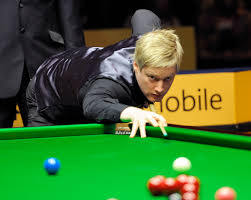 The quarter finals of the Scottish Open takes place inside the Meadowbank Sports Centre in Edinburgh on Friday when all four matches are played across a couple of session of what should be excellent action.

We still have quite a few big names left in the tournament, including four of the top eight players in the world, as well as one or two surprise packages who will be looking to turn a good run into something substantial over the weekend.

We begin the day on the main table with the former world champion Judd Trump on show. He goes up against a Thepchaiya Un-Nooh who has shown a welcome return to form over the course of this week, in what should be an entertaining opener to a good day of snooker.

Trump has made it through the best of seven format like he so often does in these Home Nations events and now he’ll be looking to turn this position into the title. He might not have it all his own way though because Un-Nooh took care of Mark Allen on Thursday and looked like he is hitting the ball like a dream. If the Thai thinks he has nothing to lose having already pocketed £11,000 for his ranking here then he could quite easily start flowing. I don’t think Trump is playing at the best of his level even allowing for his 147 earlier in the week but it wouldn’t be the biggest surprise if he gets to that level here. These two are entertaining enough to be able to watch without a bet on the match.

The second match on the afternoon is the Wilson derby as Kyren Wilson meets his namesake Gary for a place in the semi-final on Saturday. These two men are regulars at this stage of a tournament so we should get a decent match.

Kyren Wilson has played very well this week. He has played four matches and he has smashed in eight centuries in the 16 frames he has won so to say that he is scoring well is an understatement. The Warrior has been playing well all season in fairness having landed the European Masters crown at the beginning of it and only being knocked out of the UK Championship when Mark Allen found his best form. This has been a welcome return to form for Gary Wilson after a slow start to the season. The important thing for him is that he has backed up his win over Ronnie O’Sullivan when he beat Hossein Vafaei to book this quarter final spot. There is nothing more annoying for a player than to beat a star of the game and then lose in the next round. I think Kyren has the edge here, especially the way he is scoring, but Gary can mix it with the best as he showed earlier in the week so I’ll watch and see how this one plays out.

The pick of the quarter finals in Scotland this season is the one on the main table in the evening session as the twice former winner of this tournament, Mark Selby, goes up against the Australian ace Neil Robertson for a place in the semi-final.

This is the second Home Nations event in a row in which these two giants of the game have met having played in the last eight of the Northern Ireland Open. Robertson won that one and has now won 12 of their last 13 meetings and you only had to hear Selby in his interview after his last 16 win to know that record is in his head. I don’t think Robertson has been at his best this week either. He has clearly been under the weather but I certainly can’t oppose him with that record intact. I don’t really want to back him either so this becomes another that is easy to leave alone.

There is always one quarter final on the other table in the evening session of a Home Nations event and in this one it sees Ricky Walden looking to continue his return to form against a Joe O’Connor who looks to be playing very well.

O’Connor saw off Ding Junhui in the last 32 and then added Mark Williams to his list of victims on Thursday night with a performance that in his gobbledygook style on Twitter the Welshman suggested was the best anyone has ever played against him. Walden had two good wins on Thursday, beating Ryan Day 4-0 and Sam Craigie 4-1. The latter gave up at 3-1 but Walden had put him in the position to do that so we are set for a good quarter final here. I don’t see either of these players running away with this with the way they’ve both been playing this week so the 5/6 on over 7.5 frames looks the best way to play this one to me.