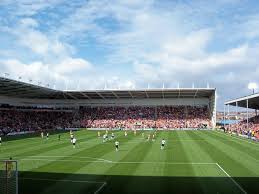 The Sky Bet Championship doesn’t officially resume until next weekend but there is one match that has been rescheduled for Saturday lunchtime which sees Sunderland taking on Millwall in the first match in the division for three weeks.

Millwall return to action as the team everyone are chasing in the last play-off place and a win here would take them up to fourth in the table. Sunderland start the day nine places below them but will be just one point behind the Lions with a win here.

The match will be shown live and in full on the Sky Sports Football channel with a very short build-up beginning at 12.25pm and kick off at the Stadium of Light taking place at 12.30pm.

This has been an up and down campaign for Sunderland which wasn’t helped when manager Alex Neil jumped ship and became the latest to think they could turn Stoke City around. Tony Mowbray was just getting going as Black Cats boss but then the World Cup came along so the momentum that they built up with two wins in their last three immediately got halted. Those two wins were both away from home and one thing Sunderland will want to do when they come back to action is improve their home form.

They have only won two matches at the Stadium of Light all season. It is easy to forget given the size of the club that this is their first season back in the Championship but if they harbour ambitions of pushing for the way out at the top end of it then they have to start winning matches at home. They had an awful lot of injuries going into the international break so the three weeks off has given them the chance to get some players back and a rest into those who might have needed it.

Millwall had a great first half of the season and will resume action very much part of the promotion picture. Of course, what has gone before is not irrelevant but everyone starts again now so they will need to find their form from the off once again. I think most people had Millwall down as a side who could improve and force their way into the promotion reckoning this season even though Jed Wallace left in the summer, and they are living up to that billing.

Millwall went into the World Cup break off the back of just one defeat in their last nine so it could be argued that the stoppage came at a bad time for them but the schedule in that first part of the season was pretty brutal so I would imagine they would have been glad it came around when it did just to give everyone the chance to freshen up and get ready for what is always a busy Christmas period even without a World Cup preceding it.

Sign up for a Boylesports account and bet £10 to get up to £20 in free bets! Perfect offer for this Sky Bet Championship! Click the image below for this great offer! New accounts only. 18+ T&Cs apply. Gamble Aware.

Tony Mowbray has suggested that star striker Ross Stewart is available after his injury prior to the World Cup break but hinted that he might be given another week of training. Ellis Simms and Lyndon Gooch are available but Dan Ballard is out.

Gary Rowett has confirmed that there will be no Benik Afobe, Ryan Leonard and Tyler Burey for this contest but importantly Zian Flemming is available and Tom Bradshaw could come into the side too if selected.

Both of these teams had a friendly last week so while they have been without a league game for three weeks they have been in action more recently than that and that makes me think we’ll see a good game here rather than one where both teams start slowly as a bit of rust has formed. I fancy we’ll see a few home wins in the first couple of weeks back. Fans haven’t seen football live for three weeks and more and will be eager to get back supporting their team so home atmospheres will be strong.

Sunderland haven’t been the best side at home this season but their injuries do account for a lot of the reason why and with most of their squad returning for this match I expect to see a much better account of themselves at the Stadium of Light for the remainder of the campaign. Traditionally, Tony Mowbray sides play well on home soil but struggle a little more on the road and with the manager having had three weeks to get a good body of work into his side if there is a winner here I fancy it will be them.

Back Sunderland to beat Millwall (DNB) for a 3/10 stake at 1.80 with BetVictor