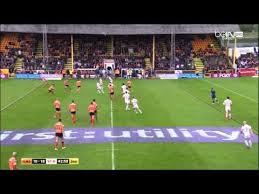 The Super League continues on Friday evening with another couple of matches as four teams with their eyes on the big prize at the end of the season battle it out in their last games before the Challenge Cup semi-final break.

One of the two matches is live on the TV while for those not lucky enough to be able to go to the other one it will be accessible on the Our League service so there is no need to miss any of the action over the evening. We’ll begin the preview with the TV match.

The televised action on Friday night comes from the Totally Wicked Stadium where the champions St Helens are on show against one of the beaten semi-finalists of last season in Hull FC in what promises to be an exciting match.

These two meet in the Challenge Cup semi-final next week so both have the opportunity to lay something of a marker down here, while competing for a valuable Super League win. St Helens go into this match off the back of their first defeat of the season so they will be looking to bounce back here. Hull FC got the better of the Leeds Rhinos last week and another win here would see them go into the semi-final in fine form. I sense that Hull FC will be competitive here but the dynamic of that cup clash next week is providing a doubt over things here so I’m going to use this one as a watching brief ahead of that.

The match away from the Sky TV cameras is a Yorkshire derby which should be extremely competitive given how both teams have gone recently. Castleford Tigers made a good start to the season but have lost their last two while Leeds Rhinos haven’t really got going this term.

Whether the sudden drop off in form of the Tigers is down to having one eye on next weekend’s Challenge Cup semi-final remains to be seen. It might be that they have been missing some senior players since the quarter final of that competition but one or two of those are back here in the shape of Liam Watts and Cheyse Blair. There is no doubt that Leeds Rhinos’ poor form has been down to missing a number of players but even with many of them back last week they still couldn’t find a way to the try line as often as you would have liked from them.

Despite that though I’m going to take the Rhinos with the eight point start here. I suspect Castleford are missing Grant Millington more than you’d think and with Niall Evalds missing here someone is going to have to slot in at full-back. I still think the Tigers are likely to win the match but with an eye on a huge Challenge Cup semi next weekend and a dent in their confidence after successive defeats if they do come out on top I don’t expect it to be a runaway success. Leeds look to be able to offer some consistency in their selection this week which should bring about the necessary improvement required to run Cas close and at least stay within eight if not beat them.

Be the first to comment on "Super League XXVI – Friday 28th May Matches Tips, TV and Betting Preview"