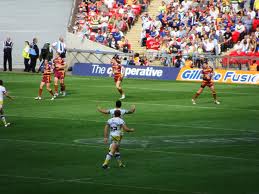 The Super League returns from the break for the Challenge Cup semi-finals on Thursday night and as luck would have it the two teams who won those clashes at the weekend meet at the John Smith’s Stadium when the Huddersfield Giants host the Wigan Warriors.

These two will meet in the Challenge Cup final later in the season but for now it is Super League points up for grabs with Wigan looking to move clear at the top of the table with a win while the Giants will move up to fourth if they can win.

The match will be available to be watched on the Sky Sports Arena and Sky Sports Mix channels with the lead up to the game beginning at 7.30pm and the kick off in Yorkshire coming at 8pm.

You would have to say that the run of the Huddersfield Giants in the Challenge Cup has mirrored some indifferent form in the Super League. I say that because after a bright start to their campaign the Giants have won just one of their last four matches in the league. Nevertheless, they have performed well in the cup and that has shown us just how good a side they are. They have secured their place in the final now and will be eyeing up bringing that form to this competition.

The only thing the Giants need to improve on is scoring points. They have shown that they are decent enough defensively. Only the Warrington Wolves have put up more than 24 points on the Giants this season but in their last three matches in the Super League, Huddersfield have managed just 36 points cumulatively and that isn’t going to get the job done very often. If they can use their creative spine to better use then they should be able to make decent progress.

This has been a wonderful first half of the campaign for the Wigan Warriors. The only disappointment would have been their defeat to St Helens on Good Friday but they avenged that in the cup at the weekend and their supporters will be heading down the M6 to London for the Challenge Cup final in a couple of weeks. It isn’t just the results that have been so much better for Wigan, their style of play is much improved from where it was 12 months ago.

They are now a team who like to throw the ball around and who carry a threat right throughout their side which is important. Although they have a much stronger attacking output this term, that hasn’t come at the detriment of their defence. You could argue that they are not as watertight as they were under Shaun Wane and Adrian Lam but they are a lot more potent at the other end of the field and that will make the difference in the long term.

Ian Watson has named his 21-man squad for this match but it does not include Jermaine McGillvary which is a bit of a blow. Watson has chosen to rest Chris Hill and Chris McQueen while Josh Jones is suspended for this game. Louis Senior and Nathan Mason are among those coming in.

Matt Peet has also taken the decision to rest some of his star players. Jai Field, Liam Marshall, John Bateman and Morgan Smithies are among those who will be sitting this one out. Jack Bibby and Willie Isa are a couple of the players who have been recalled.

These matches where both teams are resting players are never easy to bet on but I think the even money on the Wigan Warriors might just be a little too big here. I say that because although Jai Field is a huge part of what they have done this season, in Bevan French they have someone who is almost as dynamic and then when I look down the Wigan squad there is a lot of power up the middle in the likes of Brad Singleton, Patrick Mago and Kane Ellis among others while Liam Farrell, Jake Bibby, Iain Thornley and Oliver Partington are all experienced enough to deliver big performances.

I actually think that the changes that the Giants have made could be more detrimental to their chances. Chris Hill and Chris McQueen are both influential forwards that they will be doing without here while a team that doesn’t score points readily probably could do with Jermaine McGillvary on the park. I like the Giants but I think they are without a little too much in the forward areas to handle a Wigan side who look strong down the middle and who even with their absentees still have enough in the back line to get the job done.

Back Wigan Warriors to beat Huddersfield Giants for a 3/10 stake at 2.00 with Coral

Be the first to comment on "Super League XXVII – Huddersfield Giants vs Wigan Warriors Tips, TV and Betting Preview"