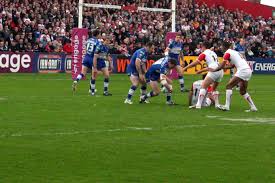 The Super League season continues on Thursday evening when a huge clash at the bottom of the table takes place when Hull KR welcome the bottom team in the competition Toulouse Olympique to Craven Park.

Hull KR are enjoying a mixed season but have the chance of a win here which would see them move level on points with Salford in sixth. Toulouse are running out of time to preserve their Super League status and could really do with a win here.

The match will be shown live and in full on the Sky Sports Action channel with the build-up to the clash beginning at 7.30pm and the kick off at Craven Park coming at 8pm.

When you consider that they were 80 minutes away from the Grand Final a season ago, much was rightly expected of Hull KR this season but a combination of injuries and the bizarre timing of that announcement that Tony Smith would leave at the end of the season has seen them underachieve on what they promised. Despite their struggles they are not out of contention in terms of making the top six but this is a match they can ill afford to lose.

The Robins go into this match off the back of a huge defeat to Wigan Warriors last week when they were down to the bare bones in terms of their squad. They have a few men back for this one and they showed prior to last week when they achieved successive wins against Wakefield and Warrington suggest they haven’t given up on the campaign just yet. Add home advantage in here and Hull KR will be eager to make the most of a huge chance.

The longer this season has gone on, the better the fight shown in the race to survive in the Super League for Toulouse Olympique has been, however the last two weeks have just seen signs of fragility which suggests that perhaps the exertions to get back into the fight to stay alive has caught up with them. Defeats to Salford and Hull FC have left them back on the bottom of the table and all the hard work they did to get above Wakefield needs to happen again.

Toulouse haven’t had any problems going ahead in matches but they seem to have an issue staying in front. Their own bad discipline is what is costing them dearly, which is always a sign that a team is feeling the pressure. If they can tidy that up then they showed in their recent three match winning burst, and when they beat St Helens earlier in the season, that they can compete at this level. It will be interesting to see if they can keep their cool when the magnitude of this match is so huge.

Hull KR will welcome Shaun Kenny-Dowall and Jimmy Keinhorst back for this match while Matty Storton and Frankie Halton are also in the squad as well. There is still no Ryan Hall, Lachlan Coote or Mikey Lewis for the home side.

Toulouse Olympique coach Sylvain Houles has been able to name Daniel Alvaro in his squad for this match along with the try scorer from last week in James Cunningham who will be eager to get the better of the red side of Hull.

Toulouse Olympique are fighting hard to stay alive in the competition this season and I expect that fight to be even more evident in this match. I won’t go as far as to suggest they will win the game but I’m not sure Hull KR have the personnel to cover eight points in this one so I do like the visitors on the handicap. At some point the penny is going to drop with Toulouse about not killing themselves with their own discipline.

The good thing for the visitors is this isn’t likely to be too intense a contest because of the players that Hull KR are missing. That doesn’t mean there isn’t any danger to the French side because there is but I still expect Toulouse to stay within eight points here. Toulouse have enough at the attacking end of the pitch to compete with a Hull KR defence that might need another week back together to be at its best while Toulouse’s desperation to win can see their own defence muscle up and repel as many attacks as possible. If Hull KR do win this, and it isn’t a guarantee that they do, I don’t see them winning by more than a converted try.

Be the first to comment on "Super League XXVII – Hull KR vs Toulouse Olympique Tips, TV and Betting Preview"