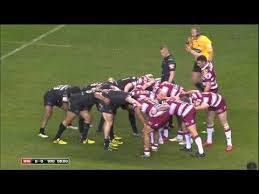 The Super League weekend continues on Friday evening when the champions St Helens step up to the plate. They play host to Hull FC in the one match which takes place in the competition over the course of the night.

St Helens can move a couple of points clear at the top of the table with a win here while Hull FC will be looking to come away from the Totally Wicked Stadium with the points themselves in order to regain fourth place.

The match will be shown live on the Sky Sports Arena channel where the build-up will begin at 7.30pm. The game kicks off at 8pm.

Saints head into this match with just the two defeats in the Super League this term, the first a loss which was a surprise one against bottom of the table Toulouse Olympique and the second against the Castleford Tigers when they chose to rest everyone after a busy Easter period. They head into this contest off the back of another defeat which came in the Challenge Cup where they were caught cold by the Wigan Warriors and couldn’t quite make up for it in the second period.

That leaves St Helens to concentrate on defending their Super League crown but there are one or two concerns that certain injuries are just beginning to leave them a little exposed. They are a champion side though and I would imagine if they hear these doubters it will only fire them up to silence them. I would be surprised if Saints aren’t right at it here but that derby last week was pretty physical so there is no guarantee about that.

After seeing Huddersfield Giants overtake them on Thursday night, Hull FC will be hoping to take advantage of their week off and use their freshness to come away from St Helens with a win which would restore them back in the top four. They won’t need telling they were blown away by Saints in Hull earlier this season but at the same time they were down to 12 men in that match so there were mitigating circumstances which might see the score naturally closer here.

The Black and Whites have won their last three in the Super League so that break probably came at the wrong time for them, even if it has allowed them to get some players back to fitness. Those wins were all at home though and now they need to prove themselves away from the MKM Stadium. If they can pick up a win against the head here it would set them up very nicely as we head into the second half of the campaign.

St Helens will be without Lewis Dodd for this match as he is a long-term injury victim. Regan Grace isn’t yet fit to start but Kristian Wolff expects Jonny Lomax to be available despite his bicep injury which is a boost.

Hull FC are expected to have half-back pairing Luke Gale and Josh Reynolds back for this match while Josh Griffin and Adam Swift are also expected to return for this one. Hull FC look very close to full strength for this game.

I think most people would be expecting a St Helens bounce back from last week and there is certainly justification in thinking that way but I’m a little concerned about their half-back pairing in the absence of Lewis Dodd, especially should anything happen to Jonny Lomax which means that he can’t finish the game. I still think Saints have enough about them to win the game but I wouldn’t be surprised if it wasn’t completely as emphatic as people expect.

I think Hull FC are a good side when they are at full strength and if the 21-man squad Brett Hodgson named is anything to go by then that is the position they are in here. They have their halves sorted and that frees up Jake Connor to have a big impact on the contest. Hull FC also have a fresh forward pack that is among the most powerful in the competition and they’ll be hunting jaded parts of the St Helens line. I’m not convinced Hull FC will win this match but the dozen start they are in receipt of is too many.

Be the first to comment on "Super League XXVII – St Helens vs Hull FC Tips, TV and Betting Preview"