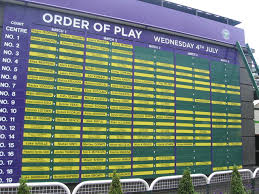 The second round of the Wimbledon tournament is scheduled to conclude on Thursday as the competition organisers look to get the event back on schedule after the rain of earlier in the week. It is a day where the doubles competitions begins alongside the singles at SW19.

We’ve seen a number of the big names twice already this week but with the backlog still there we get to see plenty more over the course of Thursday including the likes of Roger Federer, Ash Barty, Daniil Medvedev and Angelique Kerber.

There were pretty comfortable wins for some of the big names on Wednesday while others were made to work a little harder than they would have wanted. Novak Djokovic was a comfortable winner overcoming Kevin Anderson in straight sets and Andrey Rublev also coming through in three. There were tighter wins for the likes of Andy Murray, Elina Svitolina and Aryna Sabalenka who all had to go to a deciding set while the likes of Sofia Kenin, John Isner and Bianca Andreescu were among the higher profile players who exited the tournament.

It was a perfect day for us betting wise on Wednesday with the overnight held over bet of Sam Querrey to beat Pablo Carreno Busta getting us off to a good start before Mikael Ymer outlasted Jo-Wilfried Tsonga for a second winner. We got very lucky with the third one as I took under 21.5 games expecting Sofia Kenin to do a job on Madison Brengle. As it turned out Kenin was as bad as I’ve seen a player be in a Grand Slam and she got thumped. Thankfully for us she lost quickly enough to bring the under in safely!

There has already been plenty of drama on Centre Court this week and we could be set for more on Thursday. The number one seed in the women’s draw has the honour of starting off the play as Ash Barty continues her search for a first Wimbledon title against Anna Blinkova. When they are done the former Wimbledon semi-finalist Elena Vesnina takes on the young hotshot Coco Gauff before the king of SW19 Roger Federer is back on court. The Swiss legend has a date with Richard Gasquet to close the show.

There is a decent enough card over on Court 1 on Thursday with the British number two Cam Norrie first up on court. The Queens finalist will meet Alex Bolt for a place in the third round where Roger Federer could be waiting for the winner. After they have played their match out the number two seed Daniil Medvedev is in action when he takes on Carlos Alcaraz before the action concludes on this court with a women’s match which sees the former Grand Slam champion Victoria Azarenka meeting Sorana Cirstea.

The US Open finalist Alexander Zverev gets the chance to open up play out on Court 2. He meets the former Australian Open semi-finalist Tennys Sandgren for a spot in round three. Elina Svitolina had a tough test in the first round and she’ll be hoping that she can see off Magda Linette a little easier in the second match of the day before the former champion Angelique Kerber meets Sara Sorribes Tormo. The final match of a busy day over on Court 2 sees the exciting Felix Auger-Aliassime meeting Mikael Ymer.

The French Open champion will grace Court 3 to open up the show on Thursday. Barbora Krejcikova will continue her quest for a second successive singles Grand Slam title when she meets Andrea Petkovic before Matteo Berrettini looks to continue his unbeaten run when he meets Botic Van De Zandschulp. After they are done two women who went well at Eastbourne meet when Daria Kasatkina takes on the winner of that tournament Jelena Ostapenko before the entertaining Nick Kyrgios is back on court to finish off the play for the day. He meets the Italian player Gianluca Mager.

Much of the outside court action will see the doubles competitions begin and attempt to catch up from missing their scheduled first day on Wednesday. There are still some singles matches though and they see the likes of Anastasia Pavlyuchenkova, Grigor Dimitrov, Karolina Muchova, Marin Cilic, Gael Monfils and Hubert Hurkacz among the seeded players who will all be looking to progress through to the third round of the tournament.

There isn’t a huge amount that I like in the men’s draw on Thursday and given that we’re having an excellent week so far I’m not going to push the boat out and take bets that I don’t like when there is so much of this tournament left. There is one that I like the look of though and it comes in the form of the second match on Court 1 where Daniil Medvedev takes on Carlos Alcaraz in a match you have to think the Spaniard is up against it in.

To be fair to Alcaraz, he would have been a strong second favourite in this match regardless given the form of Medvedev in Mallorca and his first round here but when you think that he went five sets and over four hours on Wednesday and now has to back that up here barely 24 hours later against a Medvedev who had his feet up on Wednesday, it is fair to say the size of the task just got a huge amount bigger. This is the first professional event Alcaraz has played on the grass which doesn’t make it any easier for him. I think Medvedev wins here and he can get the job done inside 32.5 games. There is enough room in that line in case Alcaraz is competitive in the early stages before the Australian Open finalist starts overpowering him. Under 32.5 games for me.

It isn’t a much easier day in the women’s draw either so once again I’m going to limit myself to the one bet, although I have to admit I’m so tempted to take Elina Svitolina on and by the time she steps onto court I might have forced myself into it. For the purposes of this preview though I’m going to keep myself to the solitary bet which involves Kaja Juvan and Clara Burel on one of the later matches on the outside courts.

I watched most of Juvan’s opening win over Belinda Bencic and she absolutely outplayed her in the early stages. There wasn’t a whole lot Bencic could do about it and if the Slovenian has that level with her here then the French woman is going to have her hands full. Burel deserves a lot of credit for coming through qualifying to make it into this stage and she won their only previous meeting at the French Open last season but this isn’t clay. I think this one suits Juvan much better. She is clearly hitting the ball well and should be full of confidence after her win on Wednesday. As the outsider I’ll take her here.