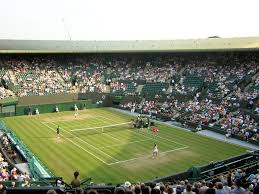 The quarter finals begin at Wimbledon on Tuesday and unlike previous years where one draw plays on one day and the other the next, this year we have half of both of the men and women playing down to the semi-final stage.

That gives a different feel to the play on Tuesday and it means that we have some great male and female players taking to the courts. All singles action is now on the two main courts which also adds to the profile of the event now.

Djokovic has moved through the gears in this tournament but Tim van Rijthoven did offer up some hope to the field in the previous round when he took a set off the six-time winner here and logic would tell you that Sinner is a better player right now than the Dutchman. The question for Sinner is whether he can dominate on his serve as often as van Rijthoven did. He doesn’t have as big a serve as the newcomer on the scene but he certainly has the better all-court game of the two. I think most people have been waiting for Sinner to be beaten in this tournament because of his lack of grass court pedigree but his movement and clean hitting has got better with every match he has played on it. I do think the Italian loses this match but I think the odds against on him winning a set before he goes is a shade too disrespectful to the world number 13.

The pick of the women’s quarter final on Tuesday is the second match onto the Centre Court when the Czech surprise package Marie Bouzkova takes on the only seed remaining in this half of the draw in Ons Jabeur.

Jabeur is a class act and she’s fun to watch and has a game ideally suited to grass so she is going to be tough to beat but I’ve come round to the way of thinking that Bouzkova might be the one to beat in this tournament for a couple of rounds now. Jabeur has seen off some good players this week, not least Elise Mertens, and the Tunisian is now on a nine-match winning streak after she took the warm up event in Berlin down a couple of weeks ago. I still think she is up against a quality act here in Bouzkova, a player who just isn’t making many errors. In fact, by WTA standards her 31 errors in the first four matches is sensational. That has come against quality opposition in the likes of Danielle Collins, Alison Riske and Caroline Garcia too. Her defence has been excellent and when the chance comes to win points she doesn’t disappoint. To put her 31 errors in this tournament into perspective, her 31 errors have come in nine sets in this event while Jabeur made 34 in two sets in beating Mertens in the previous round. The all-round game of Jabeur might still get her over the line but I expect Bouzkova to test her to the full here.

We are guaranteed an unseeded German player in the semi-final this year and in the opening match on Court 1 on Tuesday we will find out who that will be when Tatjana Maria takes on the big hitting Jule Niemeier in the biggest match of the career of both women.

There are sure to be nerves and tension aplenty in this match. Niemeier is on a stage like this for the first time in her career and although Maria is much more experienced, she is much deeper into her career and will probably wonder if she will get this sort of opportunity to reach a Grand Slam semi-final once again so there is a lot to lose for both ladies. This is one of those occasions where I suspect experience will count for something but at the same time the match might be on the racquet of Niemeier who could hit her way through her opponent. My gut feeling is that Maria could be a bit of value at a solid odds against price but it isn’t enough of one to bet on what is sure to be an edgy occasion.

The men’s quarter final on Court 1 sees the last British player in action in either singles draw on show when Cameron Norrie bids for a first Grand Slam semi-final when he takes on David Goffin whose resurgence this fortnight has been pleasing to see after his injury struggles.

They say class is permanent and Goffin has certainly been showing that this week but you’ve got to think an epic last 16 match against Frances Tiafoe which took well over four hours to complete is going to leave him at a significant disadvantage here. I’m still not convinced Norrie is the man for grass but we shouldn’t forget he made the Queens final last year and now he’s into the quarter finals here off the back of successive straight sets wins and to be fair to the Brit, he has got better with every round. I think he’s got the right opponent here because Norrie will never be beaten physically, he can run all day and you’ve got to think the needle is going to hit red in the Goffin tank at some point the longer this match goes on after having a five-setter in his legs from two days ago. That makes me think Norrie will win this but the doubts I still have over him makes me reluctant to back any handicaps or fancy bets.