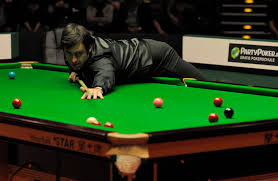 The Championship League Snooker tournament continues on Tuesday when two more groups are played out, meaning that once again eight more players will get their new season underway inside the Morningside Arena in Leicester.

Tuesday is a big day for the tournament as it is the one which sees Ronnie O’Sullivan on the green baize for the first time this season. He’ll headline the action on the main table with Michael Holt the leading light on the other table.

The action on Monday was pretty straightforward fayre for the two group winners Ali Carter and Alexander Ursenbacher. Carter had his group won on the main table after a win in his second match which meant a draw in his third one was irrelevant. Ursenbacher went one better and actually won all three of his matches and never even lost a frame in doing so meaning they were the two men to make their way into the next stage of the event.

We took Carter on in our match bet on Monday with Dominic Dale the man we took to beat him. We didn’t have the draw in play though and that proved to be the right decision because the two players drew 2-2 and Dale was 1-0 and 2-1 behind so really the push was the best we could have done, although Dale did bungle a big chance to win the third frame which was slightly annoying. In saying that Carter coughed up the last one so the draw was fair.

On the face of it Group 6 looks a very competitive affair with Michael Holt the leading light in it. He showed his short format prowess when he won the Shootout a couple of seasons ago and will fancy his chances of coming through here. There are a couple of seasoned opponents for him though as Andrew Higginson and Fergal O’Brien bring a competitive edge to Table Two. The other player in the group sees the amateur Mark Lloyd getting his reward for a decent enough Q-School campaign as he makes up the section.

All the eyes will be on the main table though where Ronnie O’Sullivan will be heavily expected to go through. You get the feeling this group is all about O’Sullivan because if he is at even 50% of his power he should be capable of winning this section. Mark Joyce rates as the main danger from a ranking standpoint but I’m not convinced that this format would suit him. Ian Burns is next in the rankings but he had to go back to Q-School to keep his card. The other player is the amateur Saqib Nasir who went well at Q-School without winning a card.

I’m not sure there is anything to be had by betting on the groups in this day of action. Clearly Ronnie O’Sullivan is absolutely unopposable unless you are Mark Joyce or someone associated with him and I have no idea whatsoever in where to start in the other group which looks a minefield given that the three professionals in it all bombed out in the opening group of the competition last year which doesn’t bode well for confidence.

If I was pushed I might have chanced my arm with Andrew Higginson who was at least in with Neil Robertson and Ken Doherty in his first group last year. There is nothing of that standard in this group but I must admit I’d like more than 5/2 on a player who I’m not sure the format does any favours for. I definitely don’t like Holt at the prices and surely this format does O’Brien no favours either so all in all the decision to sit the group betting out is a pretty easy one.

I’ll have a go at a monster price on Mark Lloyd to beat Fergal O’Brien in what is the final match for both men. Lloyd won the English under-21 title last year so he clearly has something about him. He also ran Peter Lines to a deciding frame in the World Championship qualifying last season and that form has already been franked. Lloyd all but won a tour card, losing out in the final match in the last of the tournaments and the penultimate match in the other.

That wasn’t so long ago that Lloyd won’t still have the confidence of winning matches and he is clearly someone on the up in the game whereas O’Brien is someone who is coming to the end of his career and is on the downgrade rather than improving. I’m far from convinced that this format is going to suit O’Brien and if he has taken a couple of losses he might not be up for this one. Whatever has happened to Lloyd earlier in the day, any win is going to be important to him at this stage in his career so the 4/1 on him to finish with a win without the draw in play just looks too big.