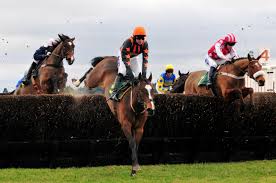 The countdown to the Grand National begins on Thursday when the three day meeting begins at Aintree and although we still have a little race to go before the 40 runner cavalry charge across the Melling Road, we have some good racing to kick off the meeting on Thursday.

We have a popular horse back at the home of some of his best results and some competitive races. The amateurs also tackle the National fences to give us a flavour of what to expect on Saturday. We’re targeting two races on the card for bets.

The highlight of the opening day of the 3-day Grand National meeting is the Aintree Hurdle which sees 3 of the 11 strong field coming here after running in the Champion Hurdle.   This is a different test in that Aintree is a flat track & one for the speedsters, whilst this race is run over an extra half a mile.

The Irish hold a strong hand with Denise Foster’s Abacadabras & Henry De Bromhead’s Jason The Militant vying for favouritism.  The former is a strong traveller but has to overcome a fall in the Champion Hurdle as well as proving he will stay over this trip.  There’s enough there to put me off backing him at such a price.  Jason The Militant, meanwhile, is more likely to stay the trip but is probably better on deeper ground.

Nicky Henderson runs 2.  Buzz is a progressive handicapper who ran a good race in the Betfair Hurdle whilst former Champion Hurdle star Buveur D’Air is a shadow of his former self.  Brewin’upastorm has looked classy since reverting to hurdles but had everything go his way last time whilst Silver Streak would have been close to being a selection had the race been over a bare 2 miles but his stamina is unlikely to last.

With some bookies paying out on 4 places, we’re taking 2 against the field.  The first of those is McFabulous who finished behind Brewin’upastorm last time out in the National Spirit Hurdle at Fontwell.  There are plenty of excuses for that defeat, not least the fact he walked through 2 hurdles & did well to stay upright, as well as the 6lbs he gave to the winner.  Despite that, he still finished just over 5 lengths back in 2nd.  On his other 3 starts this term, he won a pair of Grade 2’s, the Persion War & the Relkeel and, sandwiched in between, was a 3rd in the Long Walk behind Thyme Hill & Paisley Park over a trip arguably too far.  Add to that, he’s one of only 2 course winners in the field and good ground suits, he’s a superb each way bet to nothing.

Our second bet is Song For Someone who renews rivalry with Silver Streak after getting the better of him 2 starts ago at Cheltenham in the International Hurdle, giving his rival 2lbs that day.  Previous to that, he won another Grade 2, the Ascot Hurdle by just over 5 lengths & on his last start of last season, he won the Kingwell Hurdle, yet another Grade 2.   Last time out, he was a distant 2nd to Goshen at Wincanton but the ground was horrible that day & he’s already shown he’s better on better ground.  The one slight negative is that, in 14 starts over hurdles, the only time he’s finished out of the first 3 was in a Grade 1 at this track but, on the flip side, this is the strongest race & he’s one of a select few that is certain to get the trip.   At double figure odds, he ranks a decent bet.

A big field chase handicap over 2 miles is the scene of our other betting race on the first day in Liverpool, where the pace is likely to be breakneck with a number of prominent types in the field.  Destrier is the favourites for the Skelton’s & whilst he’s off a decent mark, he’s got lots to prove whilst Getaway Trump won a handicap at Doncaster 5 weeks ago but has top weight & a stiff mark to overcome.  Moon Over Germany won the last running of this race in 2019 but, of the market leaders, the Chris Gordon trained On The Slopes is the one with the best chance.

At a bigger price, the selection is Sully D’Oc AA who comes here off the back of a decent run at the Cheltenham Festival 3 weeks ago.  He’s lightly raced over fences but this second season chaser has put in 3 good runs over fences this year.  On his first start this season, he won a handicap at Ascot before finishing 3rd of 10 off this sort of mark over half a mile further in a race won by leading Betway Bowl fancy Clondaw Castle.  He was unlucky that day as he stumbled at the last & would surely have gone very close to winning otherwise.  After a break of almost 4 months, he was 8th in the Paddy Power Plate when the trip on a stiff track & off a fast pace was a little too much.   He loves decent ground & despite being the minimum trip, his form over further will surely be an asset for this hold up type in a race where the pace will surely see a change of complexion late on.