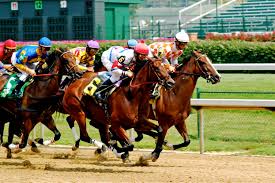 For the second time this month there is a big race over in America on Saturday night and after the controversial fallout from the Kentucky Derby, everyone will be hoping that the Preakness Stakes will pass by without the same scandals.

This race forms the second leg of the Triple Crown, a title that the horse which caused the controversy post Churchill Downs will be lining up looking to move to within a win of glory. A decent field opposes as our preview will confirm.

The second leg of the Triple Crown, the Preakness Stakes, takes place on Saturday evening & despite a small field of 10, it’s one of the most anticipated renewals in year as the favourite & Kentucky Derby Medina Spirit is in the field after failing a drugs test.  Massive controversy surrounds a horse that is bidding to land leg 2 in his bid for the Triple Crown but just imagine the uproar if he does win.  Personally, I think he’s a good chance as he’s never been out of the first 2 in his 5 career starts but I do think he’ll be hassled for the lead which may set it up for something else.  Concert Tour is his nearest market rival & after winning his first 3 career starts, he was vying for Kentucky Derby favouritism but he then disappointed in the Arkansas Derby behind one that was only 16th behind Medina Spirit last time.  You’ve got to think the horse isn’t 100% right because, if he was, surely he’d have run in the first leg.

2 rivals from the Kentucky Derby run here, Midnight Bourbon & Keepmeinmind.  The former got bumped from the gates & was not able to get a prominent sit so probably lost all chance at the start.  That said, he ran on well into 6th but his odds look a little skinny here.  The latter finished a neck behind in 7th after walking out of the stalls & making his run widest of all.  He will need the pace to collapse here & be more alert at the start but that is possible so he’s not discounted out of hand.  Risk Taking & Unbridled Honor have claims if for nothing else than their pilots whilst France Go De Ina & Ram just don’t look up to this.

That leaves me with 2 & I cannot split the pair.  Crowded Trade is the least exposed in the field & has a very similar profile to Cloud Computing who won this race for the yard back in 2017.  He won a maiden on debut in January before finishing a nose 2nd in the Group 3 Gotham & then a length 3rd in the Grade 2 Wood Memorial.  There’s no doubt he needs to improve to win here but he’s from a big yard & now has a top jockey on board for the first time.   With the most potential to improve & the fact he comes here relatively fresh unlike some who’ve had a hard race in the Kentucky, he should go very well.

Rombauer is the one I like & he’s another who bypassed the Kentucky Derby for this.  This horse has twice finished behind Essential Quality but in amongst those runs was a Group 1 2nd in the Pharoah as a 2 year old & a win in a Listed event this year.  On his last run in the Blue Grass, he was 3rd behind Essential Quality but did finish 10 lengths in front of Keepmeinmind who, on strict form lines, was only 8 lengths behind Medina Spirit in the Derby.  Taking that form literally, which admittedly isn’t always the best approach, he’s surely got a great chance.  He may need to pace to fall apart & that’s a risk in this smaller field but I’m happy to take a punt as the most likely closer.