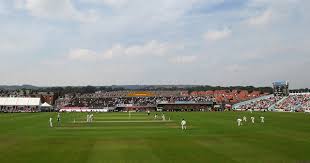 The group stage of the Royal London One Day Cup continues on Tuesday when another five matches take place up and down the country as the county campaign keeps on going despite the attention of The Hundred.

It is the new tournament that is getting the TV attention at the minute so those who want to follow the One Day Cup will need to head to the excellent streams to watch the action. Unfortunately there is some inclement weather around which we need to avoid.

There are a couple of matches in Group A on Tuesday and up at Derby someone will get off the mark for the competition when Derbyshire go up against Warwickshire. Like so many, both sides have been decimated by call ups into The Hundred which has held them back. The same can be said for the other two teams in action in this group as Surrey meet Nottinghamshire at The Oval. Both sides have won their only outing in the competition so far but these are reserve teams for both these proud counties given their The Hundred call ups.

Three matches take place in Group B on Tuesday and with the top two not in action there is a chance for others to take advantage. That means that Durham can move to the top of the table if they can see off a Middlesex side who opened up their campaign with a defeat. Worcestershire still have a 100% record and they’ll put that on the line when they make the short trip to Bristol to take on Gloucestershire while two teams who lost their only completed match of the campaign so far do battle when Hampshire host Sussex.

The rain looks like it might make an impression on a few of these matches which isn’t ideal but there is one which looks like it will dodge all the weather and that comes at the Ageas Bowl where Hampshire take on Sussex. This should be a high scoring game with Hampshire using the sides of the square for this competition with The Hundred heading to Southampton later in the week but it is a match Hampshire look a fair price to win at 4/5.

Both these sides have lost to the two dominant looking teams in the group in Essex and Lancashire so we can probably cut them a little bit of slack for that but when Hampshire named their squad for the opening match I was actually quite impressed with the strength of it when you consider that five men have been called up for The Hundred. They got into a winning position against Essex but just lacked the experience to get over the line. If they come on for the run though they should have enough to see off a Sussex side who are rightly using the tournament to blood a lot of their youth given the decimation that The Hundred has caused their squad. I like Hampshire here.

The Open – Side Markets Betting Preview