The latest action in the Premier League starts on Boxing Day when despite it being a Saturday there are six matches on the card as opposed to the four we have become accustomed to throughout the course of the campaign so far.

We still have the usual four kick off slots though so there is a choice required in terms of what to view for a couple of the timings but all six matches can be seen via the various broadcasters so there is no need to miss any of the action.

Open up a BetVictor account this Christmas and bet £10 to get £50 in bonuses to use on all the Boxing Day sport! Click the image below to open an account with this great offer. New accounts only. 18+ T&Cs apply. Gamble Responsibly. 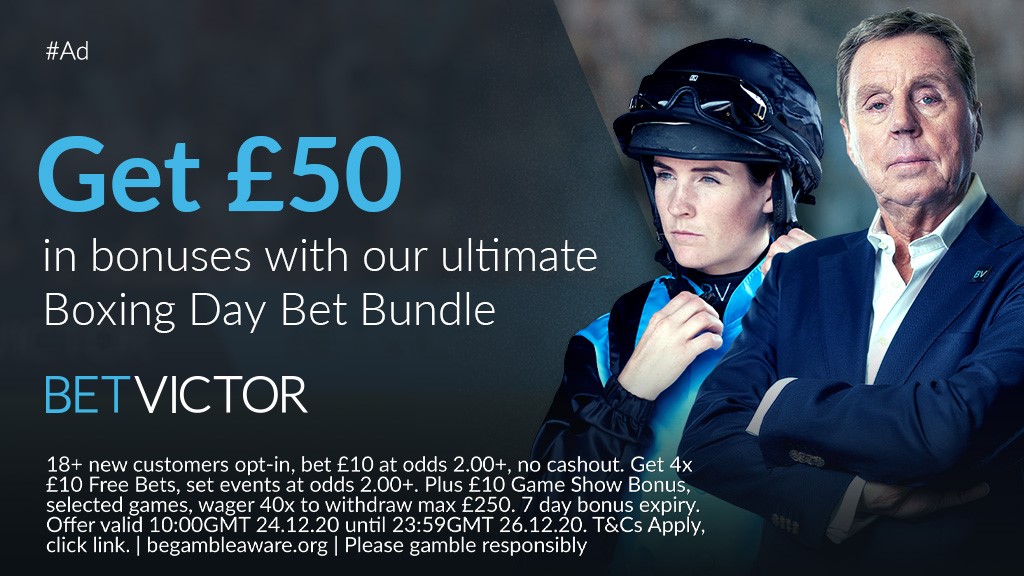 The action actually begins with the pick of the matches on Boxing Day as second hosts third when Leicester City take on Manchester United inside the King Power Stadium. After that there are a couple of matches in the usual 3pm slot with a lot of focus likely to be on Villa Park where Aston Villa host Crystal Palace live on terrestrial television. The other match in this kick off slot sees Fulham looking to build on three matches unbeaten when they host a very good looking Southampton side who could end the day in the top three with a win.

The other appealing match on the day comes from the Emirates Stadium where an under fire Arsenal side host a Chelsea team who have flattered deceive a little over the last week or so. There are two matches to finish the day off with and one of those comes from the Etihad Stadium where Manchester City welcome Newcastle United while at the same time Sheffield United will go in search of some Christmas cheer as they chase their first win of the campaign as they host an Everton team who will be reeling from their Carabao Cup exit in midweek.

I’ll go with a couple of bets over the course of the day here with the first of them coming in the form of Chelsea who should be able to take advantage of an Arsenal team who look to be getting worse rather than better. You sense there is a core of that squad who have packed in for Mikel Arteta and there are huge problems as a result of that. I have to say Chelsea haven’t impressed me in the last few games. I’ve never been a subscriber to the hype that was around them in pre-season and it might be that among the £200m they spent in the summer they’ve signed a couple of duds but a side who are looking to improve as they go along has to be beating Arsenal if they are to continue to toe that line. Their recent losses on the road were against teams who packed their defence but there is always loads of space for the Chelsea attackers to work in and I expect their quality to come to the fore and win this.

The other bet I like is for Manchester City to do a good job on Newcastle United. I’m not always the most comfortable player of big handicaps but I just don’t see how Newcastle stay close here. They played the majority of their available big guns at Brentford in midweek and still got turned over and there appears to be little room for improvement in them here. City haven’t really hit their straps in recent times but you sense someone is going to take the mother of all beatings soon when it all clicks into place for the former champions. They rested some big names in midweek and they will be recalled here so the fresher and much better side should be seeing off a Newcastle team with plenty in hand. This fixture ended 5-0 after the restart in July. Something similar has to be a chance here.

Be the first to comment on "2020-21 Premier League – Boxing Day Matches Tips, TV and Betting Preview"