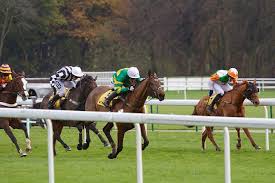 The Classics season got underway in fine style on Saturday when the hotpot was beaten in the 2000 Guineas at Newmarket, and on a busy day of UK racing we have the 1000 version of the race taking place at HQ, on an afternoon which could give more pointers to races down the line this term.

We’ll be back with a couple of bets away from the big race later but before then it is time to get stuck into the fillies version of the Guineas, one which offers up a more open feel with the well supported favourite still a 3/1 shot at the time of writing.

Quadrilateral has long since been the favourite for this after her perfect 3 from 3 record as a 2 year old.  That included a win in the Group 1 Fillies Mile over course & distance.  Some are saying she’ll be better suited by further which may well be true but I’m a little more worried by connections reaching for a first time tongue tie.

Millisle bids to give Oisin Murphy a Guineas double following his victory aboard Kameko in the 2000 Guineas and Jessica Harrington’s Irish raider holds rock solid claims.  On her final start as a 2 year old, she won the Group 1 Cheveley Park here over 6 furlongs.  There are some doubts over her likelihood of staying an extra quarter of a mile but the way she rallied after being outpaced & then ran on at the line suggested it’ll be in range.

Love is the sole O’Brien runner and is another with sound claims but she’s quite exposed and I’m hoping there are others that will improve past her this term.  That said, you cannot write off a Ballydoyle runner in this classic as they’ve supplied 3 of the last 4 winners.

Boomer has run some good races in top company and has place prospects but won’t be good enough to win whilst Raffle Prize was so speedy at 2 that she does have definite stamina doubts.  Shimmering is rated just 80 so it’s interesting John Gosden chooses to pitch her in here but her draw in 1 isn’t great whilst, at bigger prices, Les Hogues and Rose Of Kildare appeal most.

The one to carry my money though is the Richard Hannon trained Cloak Of Spirits.  Only 2 of the last 8 winners have come from these shores and the Hannon family has provided both with 66/1 shot Billesdon Brook winning in 2018 and Sky Lantern winning 5 years earlier at 9/1.   In fact, he’s had runners in 6 of the last 8 Guineas, winning 2 of them and having placed horses at 100/1 and 9/1 in 2 of the others so his record is as good as any trainer bar Aiden O’Brien.

Back to his representative this year, she won in the most eyecatching of fashions on debut at Ascot, coming clear by over 3 lengths over 7 furlongs, quickening up in good style and putting daylight between her and her nearest rivals in a matter of strides.  She then pulled too hard in the May Hill when fading into 6th despite starting favourite and then finished 3rd to Daahyeh on her only start here in the Rockfel.  That day, she still looked green but rallied and stayed on well all the way to the line, suggesting a mile will be up her street.

On debut, she recorded the best RPR of any on debut in this field and apart from the Gosden horse & a rank outsider, she’s the most inexperienced in the field so she probably has quite a bit of improvement left in her.   In an open race, I see her going very close with Millisle the big danger which is why we’ve taken a bet in the ‘without Millisle’ market too.