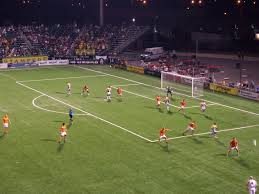 Two more matches take place at the FIFA World Cup on Monday and they begin with the surprise Group E winners Japan going up against a Croatia side who have their eyes set on going one better than four years ago.

Croatia were finalists in that tournament so they know all about navigating the knockout stages. Japan were 2-0 up on Belgium in this round four years ago and lost 3-2 so they will be eager to make up for that one.

The match will be shown live and in full on the BBC 1 channel in the UK with the build-up to it beginning at 2.30pm and the kick off coming at 3pm.

It was enough of a surprise that Japan won Group E of the competition but it was even more of a surprise that they beat Germany and Spain but lost to Costa Rica to do so. That sequence of results highlighted a couple of things. The first one would be that they are a dangerous outfit but the second thing would be they are much better when they are playing as underdogs and can utilise their counterattacking style.

Their coach deserves a lot of credit. Twice in this tournament his side have gone a goal down to European powerhouses and in both matches he made the correct changes and his team didn’t just get back into those matches, they were able to win them. That bodes well for them here as does the fact that they are the underdogs. They have shown a frailty defensively but they make up for that with the numbers they get forward when they do attack.

Croatia were one of the teams who went through the group phase unbeaten. They bookended their Group F campaign with 0-0 draws with Morocco and Belgium, although it has to be said they were extremely fortunate to come out of the latter goalless after Romelu Lukaku missed a whole host of chances. In between them they saw off Canada 4-1 with the sort of ruthless performance which will have them a danger in this tournament if it can be repeated.

It does mean that there are one or two questions about whether this Croatia team have aged or not and whether they can live with a high tempo side like Japan but they are a technically proficient side and I think they need some slack cutting their way over their display against Belgium because they were clearly caught between twisting and sticking when a draw was all they needed from the match to make it into this round of 16 game.

Japan will be forced into a change for this match because defender Ko Itakura is suspended having picked up two yellow cards in the tournament. Arsenal defender Takehiro Tomiyasu is likely to replace him. Takefusa Kubo and Kiroki Sakai are doubts.

Croatia coach Zlatko Dalic hasn’t done much in the way of changing things during the group stage and he has reported no fresh injuries ahead of this game so the 2018 finalists are likely to be unchanged again here.

I think this is a match both teams are going to enjoy because they should both get to play the style that they are designed to play. Croatia will be able to control possession and use their technical skills to get in and around the 18 yard box and look to get at the Japan goal while the Japanese will be able to look to soak up pressure and then try and hit the 2018 finalists on the counter attack, which as we saw against Germany and Spain they can be devastating with.

You couldn’t really make a case for either of these defences being brick walls. Croatia just coughed up an xGA of 3.22 against Belgium while Japan conceded an xGA of 3.81 against Germany and conceded from a 0.12 xGA against Costa Rica. Given that both these defences look like they can be exposed and both teams have shown quality and have quality in and around the box I like the idea of both teams to score landing here.