The big race of the weekend, the Group 1 Irish Derby for 3 year olds over a mile and a half.  This year, it’s only attracted a field with 5 from the yard of Aiden O’Brien.

5 runners from the Epsom Classic reopposes here including 3 of the first 5 who were separated by just over half a length.  Anthony Van Dyck (1st at Epsom), Madhmoon (3rd) and Broome (4th) are the front 3 in the market here with the first and last named both from the yard of O’Brien.

Anthony Van Dyck, our tip at Epsom, landed that race and is a short price to follow up here.  I felt the ride that Seamie Heffernan was a deciding factor as he headed over to the rail and the track seemed to suit so it’s not a foregone conclusion that he’ll follow up here.

Madhmoon has now finished 4th and 2nd in 2 Classics this term and is the one of the front 3 most likely to prevail here.  He ran a cracking race in the Derby, despite stumbling down the hill, but there’s a minor suspicion he could be a world beater over a couple of furlongs shorter.   Broome isn’t for me.  I’m convinced he needs further and looks the ideal type for the St Leger.

Of the other 5, Aiden O’Brien saddles 3 with Norway the most likely.  He has 8th at Epsom but ran a stinker at Ascot in the Queens Vase so has plenty to prove.  Sovereign was even further back at Epsom and looks like he’s in here to make the running whilst Il Paradiso is racing out of maiden company for the first time and won’t be good enough.

Guaranteed is one of the other 2 in the field but he’s twice finished behind Broome this term, beating one horse home and was out the back in the Irish 2000 Guineas.  The form of his last time out Listed win isn’t enough to win a race of this calibre.

The preference, at a big price, is Rakan from the yard of Dermot Weld who won this in 2016 with Harzand.  He’s very well bred being out of champion 2 year old Teofilio and the superstar Sea The Stars who won each of the 6 Group 1’s he contested (including the Epsom Derby).

He’s very lightly raced having only raced 4 times, and looks open to any amount of improvement.  On his 2nd start, he won a big field maiden very easily and his trainer said he was a Group class performer in the making.  That was confirmed when he started up in the Derrinstown where he was 4th behind Broome but that rival had the benefit of a run.  He then improved to win a 3 runner Listed race over this trip and the 2 in behind have since finished 2nd and 5th in the Queens Vase at Royal Ascot so the form has been franked.

It’s the only ride of the day for Jim Crowley and he’s the one open to the most improvement.  He’ll enjoy a fast pace so the inclusion of a pacemaker from the O’Brien will suit and I’m sure he’ll be in the mix.

Sign up to 888sport before the Irish Derby runs to get a hugely enhanced 11/1 on Anthony Van Dyck to win the big race! Click the image below to get these huge odds! New accounts only. Use code BOOST. 18+ T&Cs apply 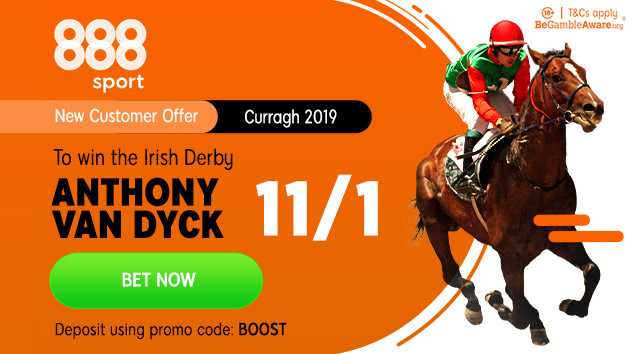 A small field of 8 for this 7 furlong Group 3 Criterion Stakes.  The favourite here is Limato from the yard of Henry Candy.

He has to contend with a 5lb penalty here but, on ratings, he only has 3lbs in hand of his main rivals.   Having said that, he’ll love the fast ground.

Glorious Journey, the mount of James Doyle, is 2nd favourite off the back of a 2nd placed finish behind Diamond Jubilee 2nd Dream Of Dreams at Windsor.  The worry for me is the trip as I’m not convinced 7 furlongs is what he needs.   Suedois is now hard to win with but does have the assistance of the in-form Danny Tudhope although his form might be a little below what’s needed here.

The selection is the Richard Hannon trained Tabarrak.   He was 4th in this last year to Sir Dancelot and he’s a 7 furlong specialist having won 6 and finished 2nd 3 times in 13 starts over this specialist trip.

He’s the joint 2nd top rated in the field and this is his 2nd start of the season after finishing both behind Zaaki and Barney Roy on his reappearance when giving them both 3lbs and when racing over a trip of a mile.    He’ll come on a bundle for that and that’s backed up by the fact he’s won on his 2nd start of the year every season he’s run (4 years).  That’s a pretty impressive stat and I fancy he’ll make it 5 from 5 tomorrow.

There’s a decent looking Premier handicap at the Curragh with 13 runners in this 0-100 rated race over a mile.

Dermot Weld saddles the favourite in Jassaar who’s won his last 2 including a valuable handicap last time out.  A repeat of that could easily be good enough but he’s officially 6lbs higher today (or 13lbs unofficially without his riders 7lb claim).    Basic Law missed out on his hat trick last time out when making his handicap debut; that was disappointing and he has something to prove.

Preference is for Port Lions who has improved run to run this term.  As a 3 year old, he finished 2nd 4 times on the spin and 2 of those defeats were to horses now rated 100 and 104, yet he races here off a mark of just 86.

On his 4 starts this term, he started off finishing 2nd and 3rd in a pair of handicaps off 82 before a no show in big field handicap 2 starts back.  However, last time he won well when jockey Billy Lee held him up out the back before making sustained progress to come almost 2 lengths clear at the line.   That was despite not having the clearest of runs.

He’s up 3lbs for that and conditions should be no issue with fast ground and a more solid pace both in his favour.