There are four matches in the Premier League on Sunday and it is fair to say that hopefully they will produce more drama and quality than the five matches did on Saturday when only four goals were scored in total.

The bottom of the table was in focus on Saturday but the attention very much turns back to the top as the top two, both Manchester clubs and Arsenal are all in action in what could be a pivotal day in the race for the title and the Champions League spots.

The action begins at Old Trafford where this crazy schedule that Man Utd are on continues when they host relegation threatened Swansea. This match comes barely 60hrs after the Manchester Derby so it remains to be seen what physical state United are in even allowing for their injuries.

Swansea are in desperate need of points but they have lost their last five matches on the road scoring just twice in that time so they have issues away from the Liberty Stadium. Were all things equal I would fancy United to win this one. I still expect them to but I can’t bet on them given their injuries and their ridiculous schedule. No bet for me here.

One of the matches of the afternoon comes from Goodison Park where Chelsea’s title run faces a significant obstacle in the form of Everton. Only Liverpool have won at Goodison this season which shows how difficult a place it is to go and how tough this match could be.

While I think this will be a tough match for Chelsea I think the bet to be had here is in the goals market. I mentioned midweek how Chelsea have suddenly started to concede goals and Everton are full of them. On the flip side Chelsea have goals themselves and Everton aren’t the tightest side at the back with their injuries. The obvious bet here looks to be over 2.5 goals. 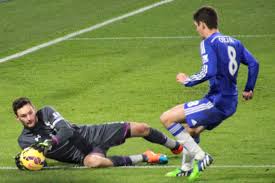 Just like Man Utd, City have the rough end of the stick in this match when they head to Middlesbrough 60 or so hours after drawing the Derby. Boro look to be heading down despite their win in midweek but they would give themselves a chance if they could sneak a win here.

I don’t rate Middlesbrough at all but I’m not sure I want to be jumping on Man City on handicaps when winning is the primary aim and when they could have tired bodies and minds so I’ll leave this one alone.

The final match of the day is probably the most important as title chasing Tottenham host their arch rivals Arsenal who probably have to win every match that they have left if they are to continue their remarkable run of finishing in the top four in the league.

Not many sides have had much joy at the Lane this season and I’m not convinced that Arsenal are going to either but the sheer must win nature of the match is likely to lead to goals. Once one side goes ahead the other is duty bound to become more expansive and look to get back into the match and that is when these things really ignite. I like over 3 goals here.