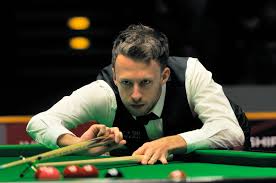 We already know that Mark Allen is into the World Grand Prix final on Sunday and on Saturday evening his opponent in that showpiece showdown will present himself when Shaun Murphy takes on Judd Trump in the second semi-final.

These two men are no strangers to big matches and winning big tournaments and both came through competitive and good quality quarter finals to setup what looks like a great semi-final on paper at least.

If you listened to interviews Shaun Murphy has given out in the last few months you will know that he was more than quietly confident that a deep run in a tournament was just around the corner for him. It looks like this is the week and he will be eager to convert it into a final and maybe more after he ran into yet another monster performance in the quarter final of The Masters last week which stopped him in his tracks there.

To be fair to the Magician, he ran into another excellent performance in the last eight here too on Friday but thankfully for him Anthony McGill gave him a chance in the deciding frame and he jumped all over it. Murphy has got in from distance well all week, scored pretty well in the main but what I’ve liked about him is he has considered each situation and not necessarily pushed the boat out when the chance hasn’t merited it. That bodes well for him.

After winning The Masters last week, Judd Trump bids for a second big final in as many weeks when he steps out onto the baize for this semi-final. I guess the big question he will need to answer is whether there are any reserves left in the mental tank for him to call upon during what he hopes will be this match and then another one on Sunday. If there is he is the man to beat. If there isn’t then he could be waiting to be beat.

There were certainly signs of the latter in the early stages of the quarter final with Xiao Guodong on Friday. He could easily have lost the opening four frames but each time the Chinese player started looking good he would miss out of nowhere which wasn’t ideal. Trump somehow came out 2-2 from those four frames and then let his scoring come out in the second part of the match to book this semi-final. He’ll need to perform better here. We know he’s capable of that but then it comes down to whether he has the emotional energy to raise his levels or whether the last two weeks are catching up with him.

These two men have met on 22 previous occasions and it might come as a surprise to some that Murphy is dead level with Trump on 11 wins apiece. Trump has the slight edge on the frame count where he is 107-104 ahead but Murphy probably won’t need telling that he has won four of their last five matches including their only meeting so far this season at the UK Championship where he came out in a deciding frame. This will be their seventh semi-final and they are locked at 3-3 for the first six. This will be their eighth meeting over the best of 11 frames. Trump holds a 4-3 lead in what is the only way to separate them really.

I have no need to bet on the match outcome here as I backed Shaun Murphy outright before a ball was struck this week so I’m effectively on him at 14/1 to win this match. Given the fact that Murphy has beaten Judd Trump in four of their last five meetings then I see no real need to hedge my bets, especially when you consider how well Murphy has played this week. Trump started well but you sense the exertions of the last week or so are catching up with him and he might need to grind out a win if one comes his way.

Usually when these two meet the deliver tight matches as we saw at the UK Championship last month when they went to a deciding frame. There have been plenty of other close matches between the two in their career too and when you consider what is on the line for the two here I’m expecting this one to be keenly fought. Both men came through tight quarter finals and I think this will be tight too regardless of who wins.