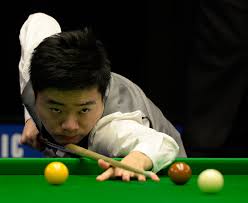 The Scottish Open begins in Llandudno on Monday and it does so with the held over matches from the qualifying round being played out among a few main draw clashes on what looks like being a high quality day of action.

The fact that the top players get their matches held over to the main venue means that we will see all of the top 16 players in the field competing right out of the traps on Monday which should guarantee some decent snooker.

The UK Championship semi-finalist Barry Hawkins is the highest ranked player on show on Monday morning after the withdrawal of Mark Williams from the event. Hawkins will be on the main table in this session when he takes on the dangerous Chinese player Pang Junxu. There is another Chinese player on show on the streamed table as Yan Bingtao looks to make the main draw when he takes on Zak Surety. The other two matches see James Cahill looking to take advantage of getting a chance following the withdrawal of Williams when he goes up against Ben Woollaston while Noppon Saengkham faces the home wildcard Amaaz Iqbal in the other match.

As always there are two sets of matches in the afternoon session with the main table seeing Mark Selby begin his title defence when he plays his qualifying round match against the youngster Sean Maddocks. Ding Junhui will be on the streamed table when he looks to turn his form around when he takes on Zhang Anda for the second tournament in succession. There is plenty of great action in this first afternoon slot, so much so that Stephen Maguire and Jack Lisowski will be resigned to the outside tables. They meet Yuan Sijun and Stuart Carrington respectively.

Ronnie O’Sullivan will begin his title quest in the second match of the afternoon on the main table. He faces a man he’ll be very familiar with in the form of Dominic Dale for a place in the main draw. Northern Ireland Open champion Mark Allen will be on the streamed table in this slot of games. He’ll meet Martin O’Donnell while on the outside tables Anthony McGill will take on Jamie Wilson and Michael Holt plays the other home wildcard in Liam Graham.

The first slot of matches in the evening sees four stars in action across the four tables. Judd Trump will be the centre of attention on the main table when he takes on Robert Milkins in one of the better looking matches of the day. Shaun Murphy is also on show in this session when he meets the female player Ng On Yee while Kyren Wilson takes on one of the surprise packages of the UK Championship in Andy Hicks. Stuart Bingham meets Andrew Higginson in the other match in this slot.

John Higgins will get his campaign for a first Scottish Open title underway in the final set of matches on the opening day of the tournament. He takes on the veteran Alfie Burden who will certainly look to take the game to the Scottish legend. That match will be on the main table after the withdrawal of Neil Robertson and that has left the match between Liang Wenbo and Allan Taylor for the streamed offering. Bai Langning has come in for Mark Williams and he’ll meet Ben Hancorn while Sam Craigie takes on Zhao Jianbo.

I’ll go with the one bet on Monday and it comes first up in the morning session where I’m taking on Barry Hawkins, who hasn’t had a huge amount of time to come to terms with his loss to Zhao Xintong in the UK Championship semi-final on Saturday night. I wouldn’t be in the least bit surprised if Hawkins is a little flat here having gone from playing in front of a huge crowd in that semi-final and the disappointment which will have come from the result even though he was comprehensively outplayed in the game.

The last thing he probably needed was to face another Chinese hotshot but in Pang Junxu that is exactly what he does come up against. You would imagine Junxu will be inspired by the heroics of Xintong in York and the one thing we know about the Chinese player is he’ll have been on the practice table. Hawkins won’t have and while he did well to make the semi-final in York, the draw opened up for him and I don’t think he played particularly well. He never played a top 16 player all week so I’m still not convinced by his form. Junxu will be up for this and if he settles to the conditions he can give Hawkins a real scare at a big price.