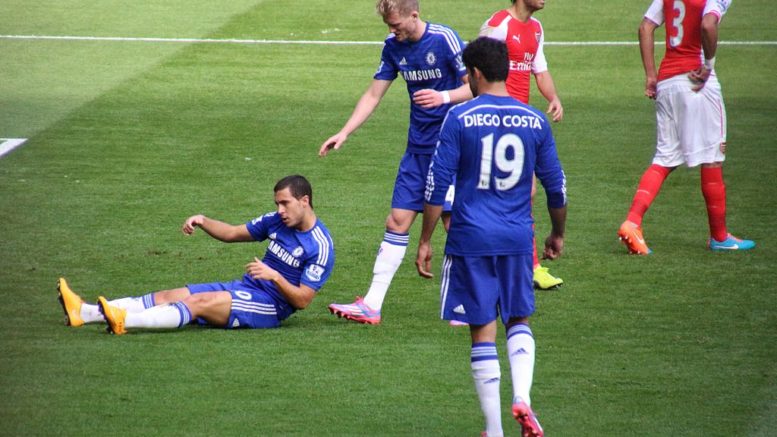 There is a potentially huge day in the Premier League on Sunday when many of the teams who are still battling for something are in action over the course of an afternoon which could all but decide the champions and who goes down.

There are seven matches in total over the course of the day and three of those are live on TV for us in the UK to enjoy. There will almost certainly be updates and coverage of the other games because they are huge at both ends of the table.

Sunday’s fixtures are as follows: (2pm unless stated – UK TV in brackets)

The TV coverage focuses on the top and the bottom of the table throughout the course of the day. It begins with Tottenham looking to move into fourth place in the league when they host a Burnley side who could do their survival chances no harm if they can win the game. The second match is all about the race for the title where Manchester City can all but confirm they will retain the title when they head to West Ham United. City will go six points clear of Liverpool with a dominant goal difference if they win. West Ham won’t go without a fight in what is the final home game for their legend Mark Noble. Finally Everton will look to pull themselves away from trouble when they host a Brentford side who have nothing to play for but have shown they’re not done with this season yet.

The biggest match elsewhere comes from Elland Road where you would imagine Leeds United simply have to beat Brighton and Hove Albion. If they don’t then they could be relegated if Burnley and Everton both win. Technically they would still be able to catch Burnley on points but they won’t overturn the goal difference deficit. Wolverhampton Wanderers can still qualify for Europe next season and they can boost their chances when they host Norwich City while Leicester City take on already relegated Watford at Vicarage Road. The other match sees Aston Villa playing host to Crystal Palace.

There is only one bet that I’m interested in on Sunday and it comes in that huge clash at Elland Road where I think the odds on Brighton and Hove Albion to avoid defeat in the match against Leeds United are attractive enough. I was surprised to hear Jesse Marsch say this is must not lose rather than must win but surely he can’t be telling his players that. Either way, they are going to have their work cut out against a Brighton side who are the fourth best in the league on their travels and who arrive here having just thrashed Manchester United.

Leeds look a beaten side to me. Admittedly their last three defeats were to Manchester City, Arsenal and Chelsea but I always think it is telling when a team loses their discipline and that is what has happened with the Yorkshire outfit. Both Luke Ayling and Daniel James were sent off for shocking challenges and will miss this game which will test a light and probably not good enough squad to the limit. Brighton have no such problems, didn’t have to play in midweek and can play with freedom. If they don’t stick the final nail in the Leeds coffin I think they hammer it in a little more.